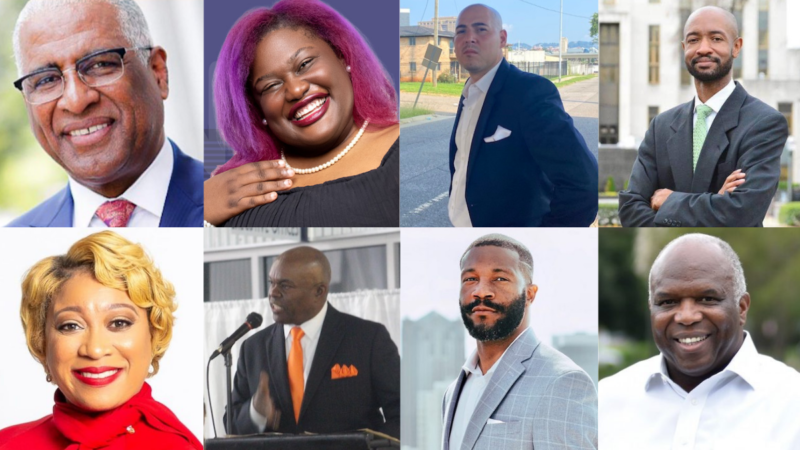 The Aug. 24 Birmingham city election has shaped up to be a contentious one, with voters going to the polls to elect the city’s next mayor, city councilors and board of education members.

In the mayor’s race, eight candidates — the current mayor, a former mayor, a Jefferson County commissioner, and several community activists and entrepreneurs — are pitted against each other.

The council races also have drawn a lot of attention. Most of the district races involve four or more candidates, with District 8 topping out with eight candidates. Only District 1 was uncontested. Incumbent Councilor Clinton Woods will return to that seat for another term.

Twenty-one people are running for eight seats on the Birmingham Board of Education. All of the board’s seats were contested except for District 7, where incumbent Walter “Big Walt” Wilson will return for another term.

BirminghamWatch has put together a Voter Guide with information you need to navigate the election, including profiles of each candidate, details about the voting process and the city sample ballot.

Political experience: First political race. She is the only mayoral candidate who has not previously run for office.

Civic experience: Director, Birmingham Chapter of the Little Black Dress Club for businesswomen; vocal advocate for mental health and for members of the local homeless population

Gonzalez has filed papers to run for mayor, but BirminghamWatch has been unable to find him to gather information.

Main issues: On his Facebook page, Hill says that, if elected, he would push for more health, recreation, and entertainment options for each of Birmingham’s nine districts; advocate for a museum in the Civil Rights District honoring African-American veterans; and develop a HBCU Sports Hall of Fame and Museum to complement the Magic City Classic football game. Hill also on his page opposes the council’s actions to encourage people to get vaccinated against COVID-19.

Political experience: Ran for the Birmingham City Council in 2005, losing to Joel Montgomery in a runoff. Finished second in the primary to incumbent Oliver Robinson in a bid for Alabama House District 58 in 2006. Was elected District 1 representative to the City Council in November 2009 and served nearly 3 terms. Defeated George Bowman for District 1 seat on the Jefferson County Commission in 2018.

Professional experience: Owner, Scales PR Marketing Firm Inc., February 2000-present. Has worked for several other businesses, including some that are family owned and operated.

Darryl Williams did not respond to request for information from BirminghamWatch, and little information on him was publicly available.

Darryl Williams is an activist who has had experience in politics for decades, but this the first time that he has run for office.

Williams told the Birmingham Business Journal that he wants to spread the city’s resources into poorer neighborhoods and away from the Downtown-Uptown corridor, starting with better funding for schools. In particular, he wants to focus on teaching trades in schools again, as well as providing grants for students who learn those trades to go into business for themselves.

Williams also wants to target waste in city government. “I want to get rid of the waste at city hall. I could do the same thing with 40 people that they do with 100,” he told the Journal.

In an interview with WVTM-13, Williams also said there should be a change in leadership at the Birmingham Police Department, and more effort should be given to getting stolen firearms off the streets. He also advocated the legalization of marijuana.

Main Issues: “Four years ago, I inherited a city struggling under the weight of blighted structures, crumbling infrastructure, vast food deserts, and stagnant growth. Since taking office, I’ve torn down thousands of abandoned buildings, repaved thousands of miles of roads, filled potholes in every neighborhood, fought to bring in new grocery stores and prepared over a thousand students to attend college tuition-free through Birmingham Promise. But many of these issues have persisted for decades — we need more than four years to fix them. In my next term, I’ll continue this growth by building more affordable housing, investing in early childhood development, working to rectify the impacts of environmental racism, spending at least $100 million with minority and women-owned businesses, continuing to reduce violent crime and turn the tide on gun violence. These goals and more are laid out on my website at randallwoodfin.com/Vision2025.”

Political experience: Has not held political office but is making his third bid for mayor, having run in 1995 and 2017.