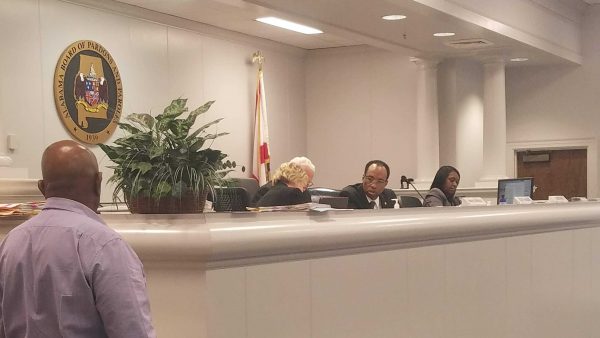 When it re-starts in May, the Alabama parole board will still meet in person but hearings will not be open to the public.

The Alabama Bureau of Pardons and Paroles (APBB) will resume parole hearings May 18 after stopping them last month in response to the spread of COVID-19.

Officials made the announcement Monday immediately after Gov. Kay Ivey issued a supplemental emergency proclamation directing the bureau to resume hearings in a “manner that reduces person-to-person interaction.”

For weeks, advocates and legal groups have repeatedly called on the state to not only re-start but expedite parole hearings using social distancing measures. They say COVID-19 could spread rapidly inside overcrowded state prisons, where people have limited access to medical care and good hygiene can be extremely difficult.

In a letter to Gov. Ivey, a group of law school faculty members and former prosecutors said the parole board should prioritize the release of inmates at high risk for COVID-19.

Charles Graddick, director of the Bureau of Pardons and Paroles, previously said having hearings without in-person public participation is complicated by “stringent laws governing the Board’s hearing process.” He specifically cited a 30-day requirement to notify crime victims and officials and give them the opportunity to participate. Incarcerated people eligible for parole are not allowed to attend their own parole hearings.

In a statement Monday, Graddick said Gov. Ivey’s emergency proclamation “clears the way for the resumption of hearings.”

Nearly 4,000 inmates are eligible and awaiting a parole hearing, according to a report by the ACLU of Alabama released last week. The halt in paroles due to COVID-19 is the latest delay after a recent shake-up in the ABPP and a significant reduction in the rate of people granted early release.

In a statement, ACLU of Alabama executive director Randall Marshall said he is glad parole hearings will resume, but they should be starting sooner than May 18, especially with the threat of the coronavirus spreading inside prisons.

When hearings start next month, the three-member parole board will still meet in person to make decisions, but hearings will not be open to the public. Officials, family members, crime victims and interested parties can provide statements of support or opposition to the board via mail, email, or phone.

Officials say a schedule will soon be posted online. They say minutes will be posted on the ABPP website within 12 hours of the hearings.