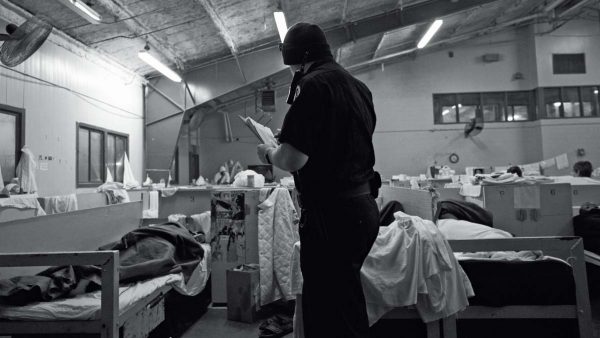 Officer Justin Stephens performs a bed roster, a count of the inmates, in one of the dormitories at at Donaldson Correctional Facility.

A group of law school faculty members and former prosecutors has written Gov. Kay Ivey urging her to have the state Board of Pardons and Paroles hold expedited hearings to reduce the risk of COVID-19 to Alabama’s prison population.

“We urge you to order the Board to resume parole hearings on an expedited basis, using appropriate social distancing measures such as video and telephonic participation in the hearings,” states the letter, which went out Monday. “The Board should prioritize the release, if necessary into 14-day quarantine, of prisoners age 50 and over and those with compromised immune systems.”

Written by University of Alabama School of Law professor Heather Elliott, the letter was signed by many of her UA colleagues and some former federal prosecutors, among them former Northern District U.S. Attorney Joyce White Vance. In addition to Ivey, copies of the letter also went to Bureau of Pardons and Paroles Director Charles Graddick, pardons and paroles board Chairwoman Leigh Gwathney, state Prison Commissioner Jeff Dunn, Attorney General Steve Marshall, state Sen. Cam Ward, R-Alabaster, and others.

The Alabama prison system, overcrowded and violence-prone, has thus far reported that none of its inmates has tested positive for COVID-19. But an employee at one of its facilities recently tested positive. In response, the Department of Corrections took steps, including a 30-day moratorium on admissions of inmates from county jails. It also applied the moratorium to those who have violated terms of their parole or probation and those ordered back to prison by a court.

In an email, Elliott said the idea for the letter to Ivey originated with Vance, who is now on the UA law school faculty.

“She was working on something similar at the national level and asked if I would be interested in taking a stab at the Alabama version,” Elliott said. “While I am not a criminal lawyer …, I have strong beliefs about the failings of our criminal legal system and am especially distraught at the idea that someone who is qualified to end their imprisonment (because [they are] eligible for parole and satisfying the requirements) could end up with the equivalent of a death sentence because the virus will spread within the prisons indiscriminately. I was happy to take up the pen.”

In a message to BirminghamWatch, Vance said she has been “generally very concerned about the risk of infection in jails and prisons and also the risk that people who work in those facilities can carry infection home to their families and back into the facilities unless government leaders take immediate steps to prevent it.”

Meanwhile, as noted in a message on the pardons and paroles bureau website, “all parole and pardon hearings through April 30 have been cancelled due to COVID-19 precautions.

“We will reschedule these hearings as soon as we have been advised that it is safe to do so,” the message states.

The letter to Ivey states the pardon and paroles board “already faces a crushing backlog of cases” and with the overcrowding in the state’s prisons, “a failure to start releasing prisoners eligible for parole could lead to countless unnecessary illnesses and deaths.”

Efforts to reach Graddick were unsuccessful.

The letter to Ivey also states that in recent years, the pardons and paroles board had been through “a period of remarkable paralysis.”

“From November 2018 to January 2019, 430 prisoners were granted parole; from November 2019 to January 2020, only 37 were, a decrease of over 90 percent. Part of this was due to dramatic reductions in the number of hearings held, with the Board reviewing only 200 parole applications in November and December 2019. But even as the number of hearings has increased in 2020, the rate of parole approvals has remained minuscule: so far in 2020, the Board has held 666 hearings and paroled only 116 prisoners; were that rate to continue, the Board would parole far fewer than 1,000 prisoners this year … The State of Alabama cannot tolerate continued inaction from the Board as the coronavirus outbreak continues to expand, given the epidemiological risks that overcrowded prisons pose to the people of Alabama.”

Cam Ward, who chairs a legislative committee charged with oversight of the state prison system, said the letter’s criticism of the pardons and paroles board is misleading because it fails to acknowledge a state Examiners of Public Accounts finding that “the 2018 (parole) numbers went way beyond that the law allowed … a lot of people who got released shouldn’t have been released.”

Ward recently said that state prisons house more than 22,000 inmates, a figure he described as fluid, and about a third of the inmates are over 60 years of age. In the most recent statistics on the Department of Corrections website – those listed for January of this year – more than 21,000 inmates were in state prison facilities, and more than 7,000 additional inmates sentenced to state prison terms were housed in county jails, federal prisons, other state prisons and other institutions.