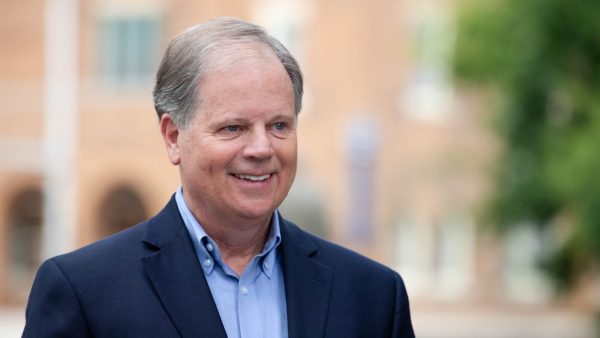 U.S. Sen. Doug Jones knows he has an uphill climb. Jones shocked the political world in 2017 by winning a special election in deeply conservative Alabama, becoming the first Democrat the state elected to the Senate since 1992. Now he is running for a full term.

WBHM reached out to both campaigns. Tuberville did not respond to multiple interview requests.

Here’s a summary of a recent conversation with Jones on the issues and the battle ahead.

Arguably the biggest issue facing the country continues to be the coronavirus pandemic. COVID-19 caused a public health crisis and has thrown the economy into turmoil. Congress passed a more than $2 trillion dollar stimulus package in March, but lawmakers have been unable to agree on a second stimulus bill. A Republican-backed plan failed to make it out of the Senate in September.

“It was really no plan at all,” Jones said. “It was nothing but a giveaway to some special interests with a few things thrown in to try to make it enticing.”

Jones called that bill a political stunt and said a bipartisan plan is needed. He has a long list of items he wants to see in a potential second coronavirus bill including aid to city and county governments, schools, the U.S. Postal Service and business, particularly airlines, restaurants and entertainment venues.

“We need to extend unemployment benefits and make sure that folks who’ve lost their jobs through no fault of their own continue to have some benefits,” Jones said. “That money goes back into the economy.”

In terms of public health, Jones said more needs to be done to increase COVID-19 testing for schools and businesses. He likened it to the Southeastern Conference, which has been able to play football because teams used resources to test players multiple times a week. Jones said a plan must be in place to distribute a vaccine once it’s available.

Jones said he’d like to incentivize Alabama to expand Medicaid under the Affordable Care Act. He said that would bring in billions of dollars to the state and help rural hospitals that are struggling financially.

Issues of racial injustice resurfaced this summer with the killing of George Floyd at the hands of police in Minnesota. Jones co-sponsored a Democratic bill aimed at dealing with issues of race and policing. But he said that bill is not set in stone and wants all groups, including law enforcement, to work to improve the proposal.

“I absolutely believe that there are ways that you can come to some agreements here that accomplishes the goal of making sure our police officers and law enforcement have the tools and training necessary to protect our citizens, but at the same time rid law enforcement of what I believe is a systemic racism that exists within those departments that I don’t think law enforcement wants in there,” Jones said.

Jones pointed to better training on racial sensitivity and de-escalation techniques. He said the bill offers more transparency around “use of force” investigations and prosecutions. It would end qualified immunity, which offers police some legal protections when acting in their official capacity. The bill also pushes state and local governments to ban chokeholds by withholding some federal funding unless such a ban is in place.

“I want to talk to law enforcement and others to see if there’s a way that we can continue to protect our police, but at the same time protect our communities and give those who are aggrieved by law enforcement the opportunity to have their day in court.”

But Jones said issues of racial injustice extend beyond policing.

“We’ve had a multigenerational failure to fully address the racial inequities in this country,” Jones said.

Jones noted gaps between minorities and whites in health care, education, business, and housing. He said passing a criminal justice measure would be an important first step with health care the next priority, again, with an emphasis on expanding Medicaid. He points to a bill he sponsored that’s now law to attract nurses to underserved areas, along with other legislation to reduce minority maternal and infant mortality and to support minority financial institutions.

“Those are things that will lift all boats,” Jones said. “It’s going to help the state of Alabama.”

The death of U.S. Supreme Court Justice Ruth Bader Ginsberg drew attention to the issue of abortion. President Trump’s nomination of Judge Amy Coney Barrett to fill the seat has conservatives excited at the possibility the high court could have a majority to overturn the Roe v. Wade decision, which legalized abortion nationwide. Jones said he won’t consider her nomination before the election because voting is already underway. He maintains the winner of November’s election should fill that seat.

Apart from the nomination fight, Republicans have hammered Jones for his support of abortion rights.

“I still believe that the way the law is currently set up, that will allow women the dignity to make that choice themselves up to a certain point is the appropriate way to go,” Jones said.

Jones’ position puts him at odds with a majority of Alabamians. He said the issue involves deeply held beliefs which he respects but characterizes as having become politicized.

“People go to their corners and they don’t come together and try to discuss those areas which we can find common ground,” Jones said.

One area he suggests is increased access to contraception to reduce the number of women who might seek abortion.

Among the attacks Jones has lobbed at his Republican opponent is Tommy Tuberville’s involvement in a hedge fund that collapsed from fraud. Tuberville’s partner was convicted, but investigators found Tuberville did not participate in the fraud and did not face charges. Tuberville has said he was duped along with investors.

Investors, though, filed a lawsuit against Tuberville which was settled for an undisclosed amount. Jones insisted the matter is not settled.

Jones said Tuberville either lied to investors going in or “played dumb” in the legal aftermath.

“Victims don’t pay other victims in lawsuits. Only defendants that did something wrong pay somebody money to settle a lawsuit,” Jones said.

Jones contended someone with Tuberville’s track record should not be trusted in a congressional role where he would oversee trillions in federal spending.

Political observers have listed Jones as the most endangered Senate Democrat up for reelection. One poll in August had Jones down by 17-points, although Jones said that poll was “silly” with bad methodology. Jones touted his bipartisanship, his ability to move legislation despite being in the minority party, and independence as winning traits with voters.

WBHM has extended multiple invitations to Tommy Tuberville to discuss the Senate race, but he has not responded.