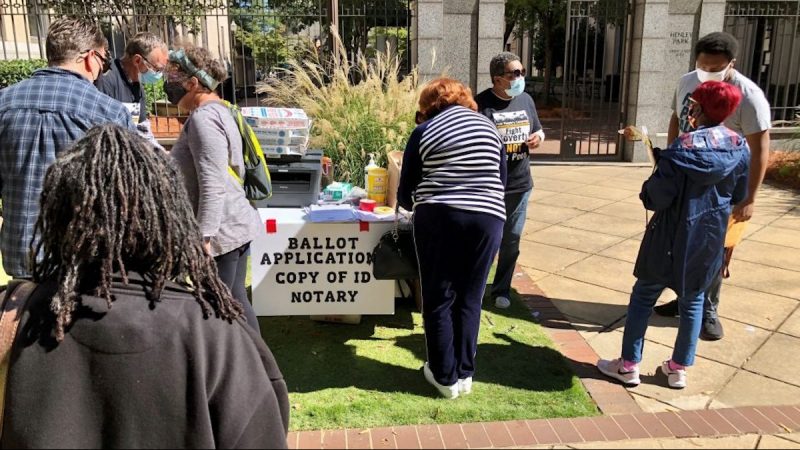 In late October, people started lining up at the Jefferson County courthouse to apply for absentee ballots.

Jefferson County election officials worked through the weekend to “cure” absentee ballots that are missing a notary or witness signatures, which are required by Alabama law.

Earlier this week, officials said up to 2,600 absentee ballots could be thrown out. That’s because a federal judge’s ruling, which waved the notary or witness signature requirement for voters 65 and older with underlying medical conditions, was reversed by the 11th U.S. Circuit Court of Appeals on October 13.

County officials said ballots cast with the waiver but postmarked after the October 13 ruling are in question and need to be “cured” for those votes to count. To “cure” a ballot, the voter would have to come to the absentee election manager’s office at the Jefferson County Courthouse to sign the affidavit envelope containing the ballot. State law prevents absentee ballots from leaving the office once they are received, meaning ballots cannot be delivered to a voter’s home to be fixed.

But identifying all the votes that need “cured” and contacting those voters has been a challenge for Jacqueline Anderson-Smith, the county’s absentee election manager, according to Jefferson County Probate Judge James Naftel.

“Normally, once a ballot is handed in it’s not looked at again until Election Day,” Naftel said. “So [Anderson-Smith] has had a very unique challenge. Because of the September 30th ruling and the October 13th ruling, we’ve operated under different guidelines. So she has definitely had to adapt on the fly and make sure all those votes can be counted.”

Naftel said they have identified all of the ballots in question. Reached on Sunday, Naftel couldn’t say how many there are. He also said local election officials planned to call those voters by the end of weekend. They’ve managed to contact some of the affected voters, but it’s unclear whether they reached them all.

Naftel said some voters have already come in to “cure” their ballots and can continue to do so before the deadline on Monday, November 2, at 5 p.m.

But what happens if your ballot is in question and you can’t get to the courthouse to “cure” your ballot before the deadline? Naftel said you can go to your polling precinct on Election Day and cast a provisional ballot.