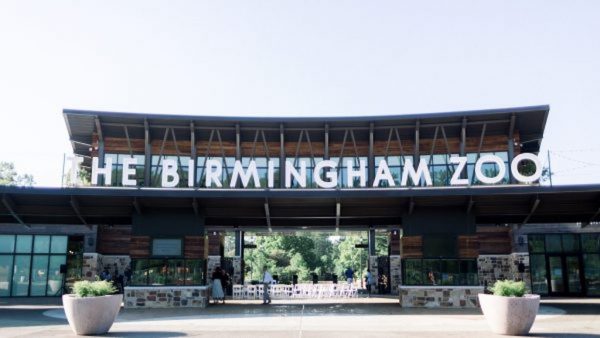 It’s a quiet, sunny day at the Birmingham Zoo and Hollie Colahan is in the lorikeet aviary. Dozens of the brightly colored birds flit around the enclosure, and they are loud.

“They’re actually one of our exhibits that normally we let people go inside and they get to feed them,” she says.

Colahan is the Vice President of Living Collections, but on this day she’s one of about sixty people spread across the zoo caring for the animals.

Australian Lorikeet at the Birmingham Zoo. She says the lorikeets miss interacting with visitors, but other than that not much is different.

“The animals still need to eat. They still need their medicine and all of those things,” she says. “And actually, when I’m here, it almost feels like the world is a little bit more normal, except that it’s really quiet because we don’t have any people here.”

Spring usually kicks off the busy season for the Birmingham Zoo, but not this year. Like many attractions across the nation, the zoo is closed until further notice because of the coronavirus pandemic.

Day-to-day operations are the same with the animals, but the humans at the zoo are worried about money. Normally, hundreds of thousands of people visit the zoo each year. President and CEO Chris Pfefferkorn says, like other non-profits, the coronavirus is having a major impact on their revenue.

“We’re having losses on all fronts,” he says. “We had a spring break camp scheduled to bring a lot of kids into the zoo. And so we missed an educational opportunity there.  We’re, of course, missing revenue via our visitors and our gift shop is closed.”

Pfefferkorn says it costs about $30,000 a day to operate, even with reduced staffing and building shutdowns. He says the government stimulus is helping them stretch their dollars and they haven’t had to lay off anyone. They did have to hold off on hiring seasonal workers for the spring and summer months.

No matter what, Pfefferkorn says, the animals will be taken care of because that’s their number one priority. Their second is to educate the community about the value of wildlife and wild places. He says, with the help of social media they’re able to keep the public informed while families shelter-in-place.

“Our education department, because we didn’t have spring break camp, have created a daily virtual spring camp,” he says. “Using videos throughout the zoo and the educational messages they wanted to get across, we’re now advertising them and showing them daily to the public.”

Pfefferkorn says he hopes this won’t be the new normal for much longer. But Colahan, the VP of Living Collections, says the animals aren’t as fazed by the quarantine as much as humans are.

“I think we’re struggling more with having this downtime of nothing to do,” she says. “But I feel like most of the time animals take advantage of that. If it’s quiet and there’s nothing going on, they have a plan, they’re going to take a nap, they’re going to interact with somebody or find something to eat.”

Colahan says animals tend to be sensitive to changes in routine, so it’s important things remain as normal as possible for them, even though they’re anything but normal for the people tending to them.