Bored Kids Stuck At Home? One Teen Finds A Captive Audience For Coding 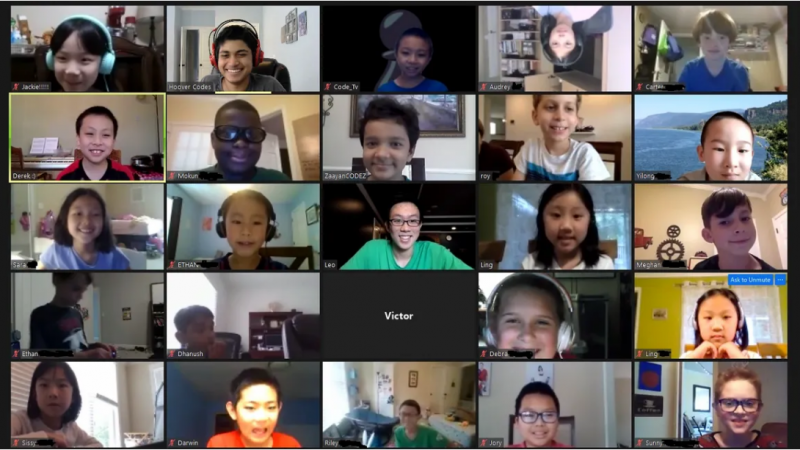 Most extracurricular activities are on pause due to the pandemic as parents grow increasingly desperate to find constructive activities for their kids. Hoover High School sophomore Shaams Nur saw an opportunity. With a couple of friends, he launched Hoover Codes, a virtual summer camp for kids ages 8-12. The camp teaches computer programming to elementary school students.

Nur himself found an interest in coding through an enrichment program in elementary school. It became his passion when he learned how computer games, like Minecraft, are designed. He said lots of kids would be interested in coding if more classes were available. “Back in elementary school, I would go home every day and I’d play Minecraft. I didn’t even understand how it worked. But after coding, I could make my own Minecraft if I really put my mind to it,” he said. “So that’s what I thought was super cool about it and that’s how we knew that kids would be interested in it.”

What was your experience teaching coding to kids over the summer? How did you keep them engaged each day?

“Well, we really did not expect to get 40 kids, but I think the reason we did was because of the coronavirus. It was during June, so it was at the height of quarantine. So parents were wondering, what do we do for our kids? All of the summer camps were canceled. So we had around 44 kids and we only had three teachers. So it really was hard keeping track. We did a good job, but for our first time, I really do think it was hard for us. But I think every single student did an amazing job. I think what we did learn was that we need to limit the students to maybe eight students per teacher, because if you really want the students and the teachers to get a good experience, then you’re going to have to make sure the teacher to student ratio is small.”

Hoover Codes began over the summer and you just wrapped up a winter version of Hoover Camp. What’s the difference?

“Hoover Codes is like a branch of Hoover Camp, I guess you could say. And then we have another branch called Hoover Entrepreneurs. It’s pretty much the same thing with the same format: we have the competition, we give them the presentations, and they work on the project. Then, with Hoover Entrepreneurs, we kind of teach them how to make their own initiative. We don’t expect them to build the next Microsoft because they are around 9-years-old. They’re really young. But we do want them to dream big and we want them to understand that there are more careers outside of just STEM. I think schools really just tell students that STEM is the only career path that’s available that you can be successful in, but it really is not. Entrepreneurship is growing and we just want kids to learn about it at a young age.”

What are some of the projects that these kids have come up with?

“For coding they can make whatever they want, but we just classify it into two things; it’s either a game or an animation. Someone made Flappy Bird. That was the award-winning project. Another kid made a Mario platformer, another little girl made an animation called ‘Love Knows No Colors.’ I thought this was really powerful. Our camp was hosted around the death of George Floyd and our student, she decided to make a project about this. She made a project and she literally sang a song. She had an animation where there were four people singing and one of them was her. And she was talking about how love knows no colors. And it showed me what we can do with Hoover Camp and how it’s not just like another project or class. It can be a big thing in our community.“

What are your hopes and the overall goal of this program?

“So for summer, I want to have at least 50 students signed up for each camp. I know that sounds like a lot and we might not have enough teachers, but we’ll take care of that part. And also I think I want to make it more spread out across the country and have branch directors. And we get to have a branch in Missouri, for example, and then someone could be the branch director in Missouri and teach their version of Hoover Camp there. And we also plan on letting students who performed very well on their projects come back and help us teach, because that really just increases our lifetime customer value. And then we’re not just having a one-time class. Instead, we’re building a community that could last for more than five years. And I think that’s the main thing, just build a community and make an impact on the existing one.“