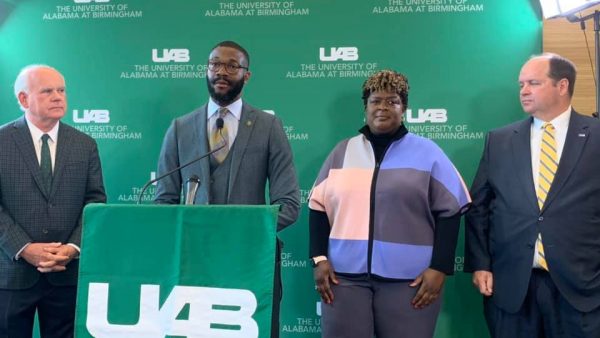 The University of Alabama at Birmingham will offer full tuition scholarships to some graduates of Birmingham City Schools as part of a new partnership with the City of Birmingham.

The city and UAB announced the scholarship program Thursday morning at a press conference.

“It makes a down payment on our city’s economic competitiveness,” Mayor Randall Woodfin says.

“We are committed to supporting access to educational opportunities for Birmingham students, for they will be our city’s future leaders and workforce,” UAB President Ray L. Watts says.

Beginning this May, all Birmingham graduates with a minimum 2.75 GPA and a 20 on the ACT will be eligible for the scholarship. It’ll cover the cost of tuition to first-time full-time students for up to five years. But graduates must first fill out the FAFSA form and apply to UAB to be eligible.

“The partnership shows that UAB is invested in developing the hopes, dreams and capabilities of our next generation,” Woodfin says. “UAB’s partnership in the Birmingham Promise is an example of the collaboration we need to make our community more connected and our economy more competitive.”

Once admitted to UAB, students must maintain a 2.0 GPA, attend full-time and demonstrate progress toward a degree.