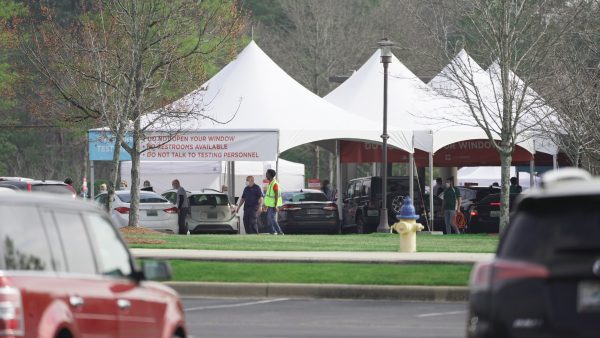 As Alabama Gov. Kay Ivey says increased coronavirus testing is needed to consider lifting pandemic protocols, data show the state lags behind most of its Southeast neighbors in testing.

Alabama had tested 1.07% of its population as of April 24 through a combination of public, private and academic testing labs, according to an analysis of Department of Public Health data. A new Harvard study suggests the state would need to increase its testing more than threefold to get an adequate handle on the coronavirus outbreak.

Dr. Jeanne Marrazzo, UAB’s Division of Infectious Diseases director, said Alabama has yet to see a downturn in new cases, though increases have slowed somewhat.

“We’re continuing to see probably a 5% increase in cases every day,” Marrazzo said. “It’s not trivial in a state with a relatively small population that is doing limited testing. It’s definitely not over yet. It’s too early to say that we have reached our peak.”

Marrazzo is also concerned about the distribution of tests in the state, as areas such as the Black Belt and the Wiregrass are charting lower testing rates than more urban counties. Alabama needs more diagnostic data to be strategic in the coming weeks, and the majority of its 67 counties have tested less than 1% of residents.

“I’m not persuaded that the distribution of the tests is as representative or accessible as it should be,” Marrazzo said. “We’re not poised to say, ‘There’s going to be a new outbreak here, we should be prepared in this area.’”

As Georgia Gov. Brian Kemp announced a plan last week — despite pushback from parties ranging from health officials to President Donald Trump — to partially lift lockdowns across the state, Ivey said she would let data drive her decisions.

Alabama’s stay-home order is set to expire Thursday, but Ivey said late last week that she is working with the state health officer on a timetable to reopen businesses in phases. Her office has signaled she may make an announcement by Tuesday or so.

“Before we can get fully open and fully operational, we’ve got to increase our testing capacity,” Ivey said at a press conference Monday, April 21. “All the decisions I’m going to make are going to be based on data — not on a desired date.”

Assistant State Health Officer Dr. Karen Landers last week declined to offer a specific testing percentage or threshold that officials would like Alabama to reach before it backs off its social distancing requirements.

A new study from the Harvard Global Health Institute estimates the U.S. needs to increase its testing threefold before it can safely consider lifting social distancing and lockdown orders.

The COVID Tracking Project estimates 146,000 people per day currently are being tested.

In an analysis of the Tracking Project’s data, the New York Times last week found that Alabama, as of April 15, had completed an average of 44 tests per 100,000 people per day, well below the 152 threshold posited in the Harvard study.

Most of Alabama’s Southeast neighbors outpace the state in testing rates. In Georgia, about 34 tests per 100,000 people were administered in mid-April, falling behind Alabama’s rates. But in Mississippi, Tennessee and Florida, per capita testing all exceeded Alabama, according to the Times analysis, with Mississippi nearly doubling Alabama’s rate in mid-April.

As of Friday, all three states had tested a higher percentage of their populations than Alabama, according to the most recently available state health department and U.S. Census population data.

Landers on Friday said the state has increased its testing capacity through its state lab, as well as partnered with larger commercial and academic labs throughout the state. Several Alabama hospitals are also running their own testing labs.

Alabama’s public lab now can handle testing about 350 specimens per day, Landers said, though the state is actively working to increase its capacity to 600. The state is currently working to ensure it has the proper reagent and platform to ramp up.

“Several things are coming into play,” Landers said. “First of all, we have areas that need specimen collection to be done. We’ve done about 113 health department-related sites. We have about 60 scheduled in the next week or so. We’re increasing our specimen collection. There are some counties that have more specimen collection than others. We’re working to ensure that persons who need to be tested are tested and then also looking at our overall trends in terms of numbers of cases.”

Only two Alabama counties — Tallapoosa and Chambers — have tested more than 2% of their respective populations, according to an analysis of ADPH data. This is not necessarily due to an increased availability of tests in that area, but due to “contact tracing,” or targeted investigations to find and test people who potentially were exposed to known infections.

In Chambers County, public officials said an early and deadly outbreak in the rural east Alabama area was likely tied to several church services in early April. In Tallapoosa, a large outbreak has been discovered at a state veterans home.

The Alabama Department of Veterans Affairs confirmed Thursday that 64 residents and 23 employees at the Bill Nichols State Veterans Home in Alexander City have tested positive for the virus. Eight residents had died from COVID-19 complications.

Veterans Affairs officials said all residents at Bill Nichols have now been tested, and the department plans to ramp up testing at its other facilities throughout the state.

“For several weeks, we have advocated for more testing at the state veterans homes, but test kits have been limited. Now that we’re able to increase testing, this significantly improves our capability to contain and reduce the risk of the virus from spreading,” Veterans Affairs Commissioner Kent Davis said in a statement Thursday.

Marrazzo said it makes sense to prioritize nursing and veterans homes for “asymptomatic” testing, or testing everyone who potentially has been exposed even if they don’t appear to be sick. Long-term care facilities are a “powder keg waiting to explode,” with vulnerable populations at extremely high risk of developing fatal complications if they contract the virus, she said.

In total, 32 Alabama counties had tested at least 1% of their populations, while 35 had tested less than 1%, according to April 24 data.

On the opposite end, four rural Alabama counties had tested less than half a percent of their populations as of Friday morning. Wiregrass counties Geneva and Dale, in addition to north Alabama’s Cherokee County and Cleburne County in east Alabama, trail at the bottom of the pack.

“The more testing you have, the more precise your estimate is going to be,” Marrazzo said. “What people have been aiming for is 5 to 10 percent. That gives you a chance to start estimating where the disease is. It also matters who you test. If you want to get a sense of what the burden is in the state, you need a representative sample of the population. You can assure yourself that you’re not missing entire areas of the state. I don’t think testing outreach is what it should be.”