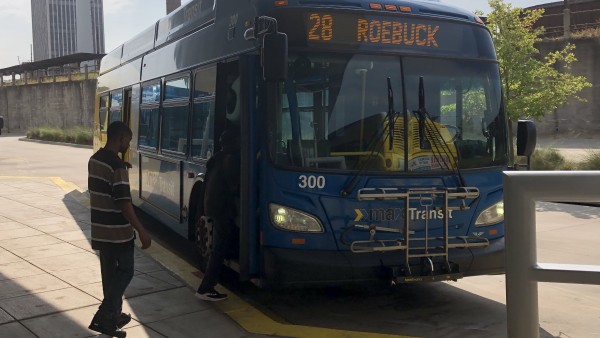 Riders board the bus at the Birmingham bus terminal.

Fewer MAX buses may be on the road in the Birmingham area next month, and riders could pay higher fares. The Birmingham Jefferson County Transit Authority (BJCTA) says the changes are needed because Birmingham doesn’t contribute enough to cover service costs for the city.

Transit officials propose phasing in fare increases starting next month. The basic rate for a one-way trip would increase from $1.25 to $1.50 in September. Over the next two years, the fare would increase to $2.

At the same time, some bus routes would be eliminated and others combined. Transit officials say these changes would help close a funding gap that has been in place for three years because BJCTA has not charged the City of Birmingham enough to cover the services it receives.

Riders like Lucinda Franklin say the increases will be a financial burden. She regularly rides the bus from downtown to southwest Birmingham for class. She says she doesn’t have a job and the bus is her only transportation.

Bus rider Anna Brown says the changes would pose a hardship, especially for people who work hourly jobs or struggle to make ends meet. She attended a meeting recently at the Titusville Public Library to learn more about the proposed changes.

“You’re cutting my service, then you’re cutting the time back to 7 o’clock where most buses will run until 9 o’clock, but you’re asking me to spend more money out of my pocket,” she says.

Officials with BJCTA say they have no choice. Alabama is one of a handful of states that doesn’t fund public transit. The City of Birmingham maintained its $10 million contribution to the bus system in this year’s budget. The system receives federal money. Also, Jefferson County and other cities including Homewood and Bessemer chip in based on ridership. Transit officials say the system needs more.

Frank Martin, the interim transit director, says balancing the budget requires tough decisions. Historically, BJTCA has been plagued with problems. Martin worked for the Birmingham transit system for a few years in the early 1980s. While he was in Birmingham, the bus system shut down and the transit director resigned. Martin says he helped get the buses rolling again.

Riders and city leaders say the buses should be more efficient.

Martin wants to eliminate the funding gap, but he is aware of the problems and the public perception of the bus system.

“We realize that we do have a problem with on-time performance. We have a technology issue,” he says. “We know that the riding public relies on us to get from home to work and school or what have you, and that’s very important that they arrive on time.”

Students and teachers at the Red Mountain Community School in Avondale see these problems first hand. Once a week, the students visit parks and attractions around the city by bus.

Mandy Deter, one of the teachers at the school, says students typically have good experiences riding the bus. But getting back to school is sometimes difficult.

“When we return home after lunch after 1 p.m., we’ve had a lot of trouble with buses just not showing up,” she says.

On a trip last year, they used a transit app to plan their trip back to school. Deter says the route was posted and they waited for a bus for close to an hour across from Regions Field.

The bus didn’t show, so the group walked a few blocks to the bus terminal on Morris Avenue. They caught another bus and turned it into a teachable moment, Deter says.

“You have to always be prepared in a city change,” she says. “And in our specific city, what about these people who depend on this bus?”

BJCTA says it averages 3 million riders a year. Some of those riders have weighed in recently at a series of public forums.

Martin made a few changes based on that feedback. He says there may be more adjustments before the transit board votes on the proposal next month.