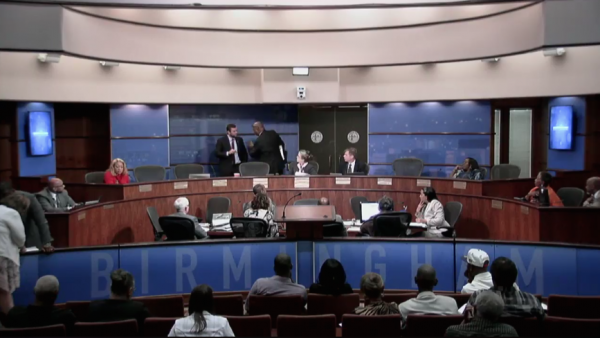 The funding initiatives were fulfillments of promises made by Mayor Randall Woodfin’s FY 2019 budget, which switched the BJCTA’s funding from a lump sum payment to quarterly installments, and which removed funding from various economic development organizations and instructed them instead to apply through the newly created Department of Innovation and Economic Opportunity.

Second Chance for a “Second-Chance Company”

Though Woodfin and members of the council expressed “grave concerns” about the way the BJCTA was being run, they ultimately all agreed on the funding so that citizens reliant on the public transit system would not lose service. Even so, the amount that was approved will be meted out in quarterly installments of $2.5 million — a way, Woodfin said, to keep the BJCTA in check.

Funding for the BJCTA has been a key issue throughout this year’s budgeting process. In April, Woodfin threatened to pull city funding from the authority unless its board agreed to develop a “leadership stability plan.” The budget passed by the council in June slashed BJCTA funding from $10.8 million to $5 million, with another $5 million allocated to “future transit projects.” Tuesday, Woodfin said his earlier demands to the BJCTA “have been complied with.”

The latest scandal that raised concerns among councilors was news Monday that two senior BJCTA executives had been fired – chief of staff Adrian Solomon and finance director Gary Collins.

Collins was fired after news broke that he pleaded guilty in 2015 to charges of tax fraud and wire fraud.

While Woodfin acknowledged that controversy, he still urged for the funding to be passed with caveats.

“I believe there may be some questions to know what kind of accountability measures can be put into place to make sure this money goes to where it needs to go to,” he said.

Those questions were asked most pointedly by District 2 Councilor Hunter Williams. “To be honest, the fact that the chief of staff was fired, the finance director was fired, the finance director turned out to be a felon who has committed tax fraud and wire fraud … I have legitimate concerns,” Williams said. “I don’t know if those taxpayer dollars are being spent appropriately.”

Interim Executive Director Christopher Ruffin — also a convicted felon who has described the BJCTA as a “second-chance company” that made him “a better man, a better person” — told Williams that the BJCTA would follow proper procedure to hire a finance director.

“Somewhere along the line, which is my responsibility, we did not do that properly in getting a finance director. We are going to take the proper measures,” he said.

He also agreed to provide the council with documentation of “how that money is allocated through our system.”

Despite his skepticism, Williams acknowledged the reality that, if the council did not approve the funding, citizens who rely on the Birmingham’s transit system would bear the brunt of the punishment.

Hoyt, along with District 9 Councilor John Hilliard, echoed those concerns.

“I think if we’re going to be serious about transit, it needs to be funded in the most expeditious way we can do that,” Hoyt said. “The issue is, we have folk who are transit-dependent.”

He added that he did not agree with “piecemealing the money” into quarterly installments. ”But I’m glad you’re getting the little bit you’re getting,” he said.

Hilliard directed his criticism toward the BJCTA board, saying it had been micromanaging day-to-day operations of the authority. “We need to toughen up on the way we appoint some of these board members,” he said. “They should have been vetted. I am not happy.”

The council in the end voted unanimously in favor of the funding.

BBA, REV, Jones Valley and Others

Hoyt ended his comments on the BJCTA by arguing that the calls for transparency and accountability should be applied to every organization that receives money from the city. That statement governed his actions throughout Tuesday’s meeting.

Those funding agreements had been on the meeting’s consent agenda, meaning that they would have been passed without discussion. But Hoyt removed them from the consent agenda at the top of the meeting to force discussion of each separately.

Several of these organizations, such as REV Birmingham and the Birmingham Business Alliance, had their funding cut in the FY 2019 budget. They were required to apply for funding through the mayor’s new Department for Innovation and Economic Opportunity, which was allocated $1.3 million to dole out in “economic incentives.”

Nearly $670,000 of that money was given to those five organizations in the form of Building Opportunities for Lasting Development program agreements. Woodfin said the items had been vetted in a process that was “more fair, neutral and objective” than previous ways of disbursing economic development funding, which included a system of quarterly reports from each organization receiving money from the city.

One funding proposal — a partnership between Create Birmingham and the Dannon Project to provide entrepreneurship training to the Pratt-Ensley and North Birmingham areas — was spared Hoyt’s line of questioning, thanks to the presence of Dannon Project Executive Director Kerri Pruitt.

“(Carpenter) was smart enough to bring Ms. Kerri Pruitt. If she’s involved, I know it’s going to be right. So I’m done,” he said, drawing laughter from the dais.

Hoyt and Others Say the Western Area Often is Left Out

Hoyt grilled most of the agencies. He criticized the Birmingham Business Alliance for not putting resources into west Birmingham, particularly toward developing brownfields into usable commercial property. He ultimately voted no, while all of his fellow councilors voted yes. “I know when I’m defeated,” he said, laughing.

He had similar criticisms of REV Birmingham’s work, echoing common criticisms that the organization does not extend far enough to the west. “There’s really no plans for Ensley, to develop it,” he said. “And we’re going to give them another nearly half-million dollars?”

“The whole irony is that we haven’t gotten anything,” Hoyt said. “Their focus is not on those outlying areas, with the exception of Woodlawn … There’s life outside the city center, and we all need to experience our shot in the arm.” Once again, he was the sole dissenting vote.

Though he started off critical of the Jones Valley Urban Farm — it did not do enough work with communities west of Interstate 65, he said — the testimony of a former Birmingham City Schools student who had an internship with the farm led him to change his mind and to add $10,000 of his office’s discretionary funding to the project. District 5 Councilor Darrell O’Quinn promptly matched the grant and added that it would also “please me greatly” if Jones Valley made efforts in west Birmingham.

Hoyt’s only complaint for the Urban Impact funding proposal was that it was receiving much less, $60,000, than the “majority”-run REV. “And we know that Urban Impact has a purpose with the black business district,” he said. “There’s too much disparity there … If black folk are treated like this in this city, then we can’t expect any change.”

Woodfin called Hoyt’s criticisms “crazy,” adding that Urban Impact had requested only $120,000 and had gotten an additional $30,000 in non-BOLD funding the previous week.

“BOLD is a process,” he said. “There is not one organization that got 100 percent of their requests. … No one got everything they wanted, but it was very fair.”