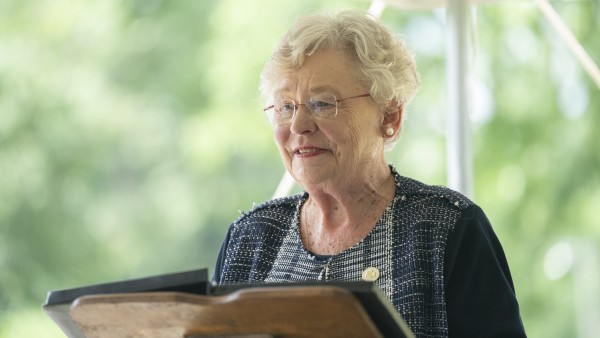 Gov. Kay Ivey, 74, announced Thursday that she has lung cancer. This comes after her doctor recently found a spot on her lung during a routine visit.

Ivey says additional tests confirmed it was “a tiny, isolated malignancy.” On Friday, Ivey will head to the University of Alabama at Birmingham for an outpatient procedure. She’ll begin a series of specialized radiation treatments soon. Ivey says she’s been reassured by her doctors that the treatment plan she’s on has a very high success rate.

Ivey says it’ll have “a minimal impact” on her schedule and says “none of this will prevent me from continuing to serve as your governor and doing the work you elected me to do.”

Stephanie and I join countless others who will be praying for @GovernorKayIvey‘s full recovery – We are all united in her journey and in the journeys of so many who are never alone in defeating #cancer. https://t.co/kWb4gCIJcz

Throughout her career, Kay Ivey has proven herself to be a strong and determined woman who will confront any obstacle placed in her path. The courage and tenacity she has shown in the past will serve her well in the challenge that lies ahead. — Will Ainsworth (@willainsworthAL) September 19, 2019

Ivey also received support from the Hoover Democrats in Birmingham.

This isn’t the first time Ivey’s health has been in the spotlight, and when questions emerged about her health and age a month before the 2018 primary election, she responded, “For those who are genuinely interested, my health is doing great. I’m in good health, and I give thanks to God Almighty for it.”

Ivey defeated Mayor Maddox but not without speculation within her own party. Fellow Republicans like syndicated political columnist Steve Flowers said she looked senile and questioned whether Ivey could “stand for an hour and a half.”