Why People Are Talking About Gov. Ivey’s Age 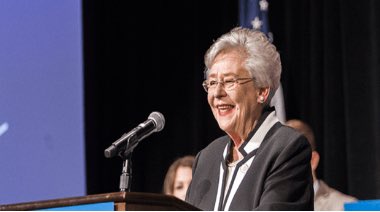 The midterm elections are still a few months away and already there are questions about whether Gov. Kay Ivey has the stamina to campaign.

Sallie Bryant, the chairwoman of the Jefferson County Republican Party, said Republicans have to make sure Kay Ivey remains governor, but Ivey must prove she’s up for the challenge.

“She is a lady who looks older than she is, in my opinion,” Bryant said. “I mean, I am very close to her age and you’re probably going to say ‘really?’ But there’s a lot of difference in the way I look and the way she looks.”

Ivey is 73 years old. When questions emerged about her health and age a month before the primary, she responded, “For those who are genuinely interested, my health is doing great. I’m in good health, and I give thanks to God Almighty for it.”

Ivey’s campaign declined to comment for this story and said she was not doing any campaign interviews at this time. But she did release a note from her doctor saying her health wouldn’t affect her duties as governor, but only after democratic nominee, 45-year-old Walt Maddox, released his records.

“You have this very young handsome looking man and you have this woman who has been there for a long time and … she’s got gray hair and she’s a little bit older,” said Elizabeth BeShears, a consultant who has worked on political campaigns including Robert Bentley’s first run for governor.

She thinks Ivey has a good chance of winning this year, but BeShears said, she needs to start campaigning and talking about the issues, instead of feeding into the conversation about her age and health. That can be hard when fellow republicans like syndicated political columnist Steve Flowers say she looks senile and make public comments like one at a recent meeting of the Middle Alabama Republican Club.

“She cannot debate. I’m not sure if Kay can stand for an hour and a half,” Flowers said. “I don’t know if you need to be putting her under that stress.”

Elizabeth BeShears said there is a double standard and people would not be talking about Ivey’s age or health if she were a man.

“I think it’s kind of a little bit of a cheap shot,” she said. “We’ve had a lot of older candidates through the years. I mean Governor Bentley was 67 when he first ran and then he was 72 – 73 when he left office.”

But not all republicans think Ivey’s and health will negatively impact her this election. Senator J.T. “Jabo” Waggoner said with her age comes experience and knowledge that Maddox does not have.

“You know I’m older than she is, and I’m still active in the Alabama’s senate. I’m healthy. I can still think, and she can too,” Waggoner said.

But Skidmore College political scientist Christopher Mann, who studies people’s impressions of candidates, said the media and voters are more critical of female candidates like Ivey.

“We judge people using things that are, in some ways, in the lizard brain based on voice pitch, or appearance, age and gender,” he said.

Mann said there are risks for Ivey if questions around her stamina continue to loom large.

“If the narrative becomes she’s not hitting the road because she’s not able to do it, doesn’t want to do it. That becomes a problem,” he said.

But Mann said like all incumbents, Ivey has a balancing act between her day job and her campaign, so her strategy of keeping the campaign on the backburner is typical at this point in the race.