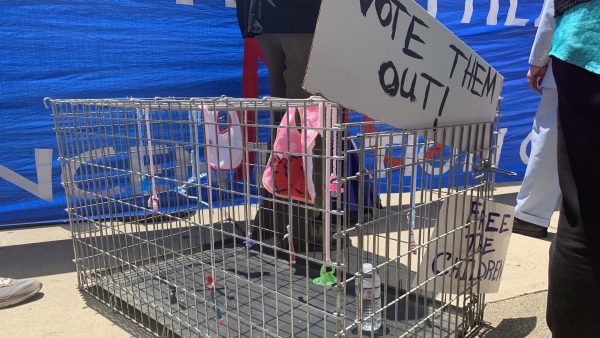 Roughly 100 people packed the sidewalk in front of the Robert S. Vance Federal Building and U.S. Courthouse in downtown Birmingham Tuesday to protest conditions in migrant detention centers across the country.  Allegations that children are living in squalid conditions, forced to sleep on concrete floors with limited access to bathrooms and no way to brush their teeth or bathe, have prompted calls for action and pushback from officials with Customs and Border Protection.

Dozens are gathered at the Vance federal building in Birmingham protesting the conditions in child detention centers across the country. pic.twitter.com/ArwDtGLmZl

Joyce Vance, former U.S. attorney for the northern district of Alabama and current MSBNC contributor, told the crowd that “the people that this administration is holding in concentration camps and sequestering in even worse camps in Mexico, these are people who are seeking asylum in our country. Something that international law provides for.”

Former US Attorney for the northern district of Alabama, Joyce Vance addresses the crowd and ends by saying “close the camps” pic.twitter.com/sdeV0bcflN — Janae Pierre (@missjanaepierre) July 2, 2019

The nationwide protests, dubbed #CloseTheCamps on Twitter, happened on the same day news broke about a secret Facebook page where current and former border patrol agents made offensive comments about a 16-year-old Guatemalan boy who died in May while in Border Patrol custody.  Other posts targeted Reps. Alexandria Ocasio-Cortez, D-N.Y., and Veronica Escobar, D-Texas.  There are multiple posts with graphic illustrations falsely depicting Ocasio-Cortez performing a sex act.  The CBP has launched an investigation into the Facebook page.