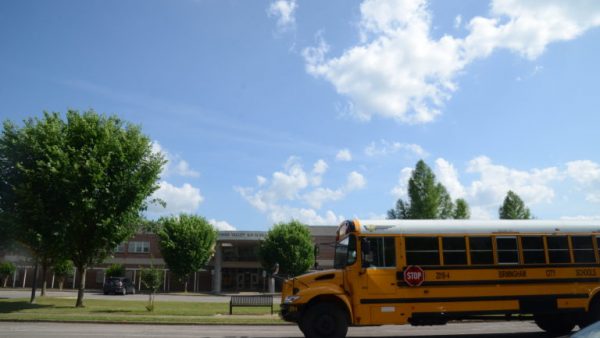 A bus pulls up at Jones Valley Elementary School

Birmingham City School Superintendent Lisa Herring said Tuesday that, although she’s not sure where BCS will go to make up the $2 million that Mayor Randall Woodfin is proposing to cut from the school’s budget, she’s confident “it doesn’t put the district in a state of distress.”

Woodfin’s budget proposal would cut the city’s funding for schools from $3.2 million to $1 million. It would place that $2 million into a fund for the Birmingham Promise Education Initiative, a public-private partnership that would provide juniors and seniors in Birmingham city schools with paid apprenticeships as well as dual enrollment opportunities with Lawson State and Jefferson State community colleges. The program also would offer scholarships for city school graduates to attend public colleges and universities in Alabama.

Woodfin defended his budget to the City Council on Tuesday, saying it would allow the city to invest directly in students.

In previous years, BCS has spent the $3 million allocation from the city on community-based and outreach programs through the schools; one-time purchases to meet security needs, such as metal detectors; and on personnel, athletics and academics, Herring said.

The city board of education in a letter to the mayor and council expressed support for the Birmingham Promise program but asked that the $2 million cut be reconsidered in the future.

Herring echoed that idea in an interview with BirminghamWatch, saying she understood the Birmingham Promise initiative would have a direct impact on students.

“We are aware that we are talking about an amount in which, given the overall budget of our organization, there is space for us to have recovery,” Herring said.

Board of education member Mickey Milsap is also confident that funds will be found to make up the difference.

“We’re talking about a little bit less than 1% of the entire budget,” Milsap said. “but it’s still $2 million and we never want to see it go.”

He also said the schools have gotten more money in tax revenues in recent years because of economic development in the city, for which he credits the mayor’s office and the city’s efforts to build the economy.

Milsap said he understood that Birmingham residents might be concerned over the mayor’s spending decision.

Board member Sonja Smith agreed. “The money we get from the city is basically a gift,” she said.

“The city has a right to do what they want to with their money,” Smith said.

She said she might feel differently if the money were being taken to fund streets or something different. But since it still will benefit students, she’s OK with it.

She said she has asked BCS how it will reduce spending to make up for the cut but has yet to get a response.

“We will have to be better with how we use the fund and make sure to watch how we’re spending, but I don’t see it as a burden for us,” Smith said.

More for Students, Less for Schools

Board member Terri Michal didn’t protest the cut, but she did point out that, even though the Birmingham Promise money is helping students, it isn’t helping schools.

“They really are two different things,” Michal said. “This money (in the past) goes toward K-12 education but for the Birmingham Promise, it specifically stated that is it for post-secondary education and training opportunities. So, we are really taking money from one pot and putting it in another.”

She also said other apprenticeship programs exist in the state that students can take advantage of. Michal said she believes that, if the mayor and councilors have strong feelings about how education funding should be spent, they should sit down with the board and discuss it.

“It is the city’s money, and if there is a direction they want to see that money (go), then, of course, they can say it. If the mayor and City Council want to see a different way, I am all for maybe getting more aides in the classroom, make smaller classrooms for K-third grade. There so many things that we could do if we came to gather and talked about what we are going to do to move the academic needle in K-12 education,” Michal said. “I would encourage the mayor and City Council to have that conversation with us.”

The Birmingham Promise money shift is not final. It is in Woodfin’s proposed budget, but the official city budget has yet to be passed by the council. The deadline was July 1.