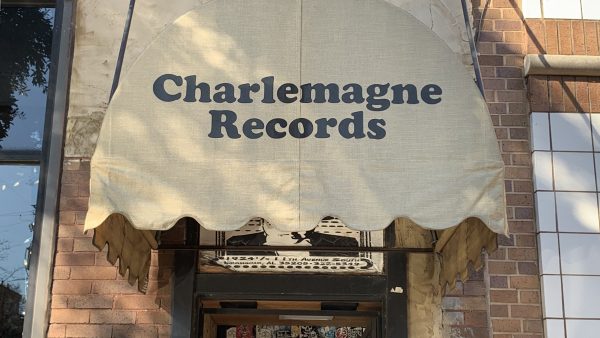 Remember buying your very first album? Maybe you spent hours digging through crates at a cozy, cluttered music shop. For many people in the Birmingham area, that place was Charlemagne Record Exchange. It’s been open for more than 40 years, but it’s set to close at the end of the year. Like many brick-and-mortar music retailers, Charlemagne has struggled with sales in the digital age.

On a recent Saturday, dozens of customers packed Charlemagne for its close-out sale. They rummaged through crates full of vinyl records ⏤ jazz, country, reggae, rock and roll. There are also old CD’s and cassette tapes ⏤ remember those?

“I just kind of fell in love with Five Points and just happened to drive by and see this old sign and wandered up here,” she says. “I was just in love with this place.”

Matthews calls the the record store a magical place. The long, narrow staircase leading to the entrance, the posters, the cozy atmosphere ⏤ it’s all part of the store’s vibe.

“It’s got that old record store feel, that smell, really good selection of used albums,” she says. “You can kind of spend forever in here looking through everything, and it’s just really sad to see this place go.”

Marian McKay Rosato opened Charlemagne 42 years ago with $500 and a handful of crates full of vinyl records. She says for the past couple of years she’s struggled to pay the bills.

“That [notice that the rent would increase] and our sales had been down,” she says, “and we just couldn’t continue.”

McKay Rosato says sales aren’t enough to cover the store’s overhead. So, earlier this month, she announced it was time to close up shop for good.

Running a successful record store can be a challenge these days. Fred Osuna opened Laser’s Edge CD store in Homewood in 1991, but a decade there were some pretty big changes.

“Year 2000, 2001, the market started to max out, and Napster and other internet services started to get introduced to the public and slowly people migrated over the next five or six years to streaming,” he says.

Osuna closed up shop in 2007. In the years since, record store owners have felt even more pressure from subscription streaming services like Apple Music, Amazon and Spotify.

But there are still plenty of people buying vinyl. This year was a big one for vinyl sales on Black Friday. And MusicWatch, an industry research company, found that 58% of vinyl buyers only purchase used records. Osuna says Charlemagne catered to fans of used vinyl.

“For a long period of time, they weren’t even being manufactured in mass and you couldn’t find them except in a store like Charlemagne,” he says.

McKay Rosato says vinyl will never go out of style because it’s an art form.

“It’s just a great experience to be able to hold a piece of art in your hand and go ‘this is really what I want to listen to right now,'” she says.  “And you put it on and you just sit there and absorb it and you get to look at the liner notes and all the history behind the album.”

McKay Rosato says her life without Charlemagne will look a lot different.

“I’m going to semi-retire. I’ve done yoga for 30 years, so I thought I’d see if I could get certified to teach yoga and do other things that I love,” she says.

Things like spending time with her grandkids and singing. She’s a jazz vocalist and hopes to book more gigs in the Birmingham area.

McKay Rosato says good things come to an end. But there’s a chance Charlemagne could live on. She says two people have approached her about taking over the shop, though no commitments have been made.