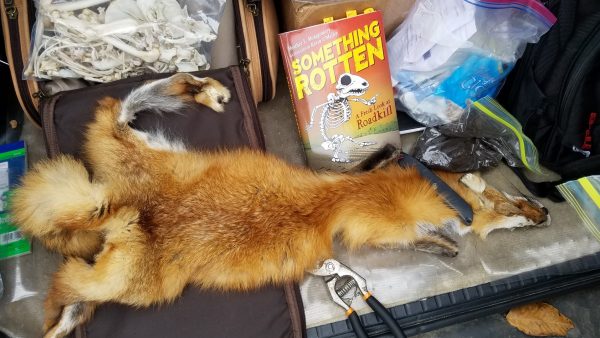 "Something Rotten, A Fresh Look at Roadkill" explores what we can learn from studying roadkill.

When North Alabama author Heather L. Montgomery sets her mind to something, she commits. Trekking through the woods on the side of Highway 65 near Cullman, she points to a spot a few yards away.

“This is kind of the environment that I was in when, ok I was driving down the road and I saw a turtle and it was just coming on to the pavement,” Montgomery says.

She thought to herself, ‘this turtle needs help.’ So she pulled off on the side of the road to move it to safety. More often, by the time she arrives, it is too late for that. The animals have become roadkill. But Montgomery, a naturalist and biologist, still stops, because she says their bodies have a story to tell.

“And then when I realized that there are other people that, like, paid attention to roadkill, it blew my mind,” Montgomery says.

In her new book, Something Rotten, A Fresh Look at Roadkill, Montgomery shares her journey to find these people. She interviews a biologist in Australia who studies cancer in dead Tasmanian devils, and herpetologists who collect run-over snakes, classified as D-O-R, “Dead on the Road.” Sometimes these roadkill-obsessed scientists discover new species. Others study roadkill to prevent it. There are engineers who find “hot spots” where animals often get hit, then build tunnels for them to cross underground or set-up barriers to restrict access.

Montgomery has published more than a dozen books, exploring topics like insect parenting and bugs with rude behavior. She writes for kids, but really for anyone who is not afraid of a little gross.

“Adults are fascinated by this material too,” she says, “but we’ve kind of trained ourselves to not look at things, and kids aren’t limited. They’re not inhibited yet.”

In Something Rotten, Montgomery describes beetle larvae that eat away at flesh and parasites that feed off of dead animals. She says the gore serves a purpose, showing what we can learn from what she calls the tragedy of roadkill. Armed with plastic gloves, hand sanitizer and a knife, she is always prepared to pull over on a busy road or highway.

“So this is what I carry with me, so that when I find an animal, either if it’s an animal that needs to be submitted to the natural history museum, or if I need to collect parts for scientists or if I’m going to use that body for educational materials, this is what I have,” Montgomery says.

She does not advise people to go out and collect dead animals themselves, not without training. But Montgomery hopes Something Rotten will reshape how readers look at roadkill.