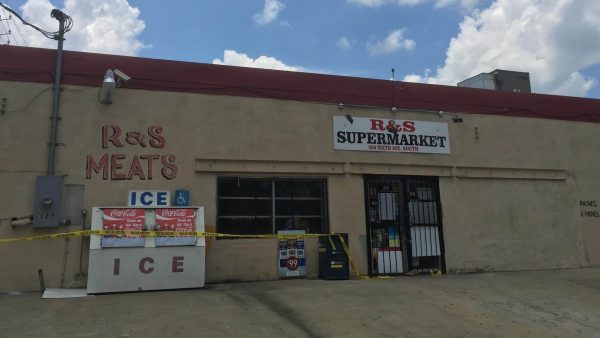 A federal investigation into food stamp fraud called operation T-Bone shuttered 11 stores across Jefferson County in June. The scam allegedly involved store operators buying food stamp debit cards from local customers and then using those cards to stock their own shelves with goods from wholesalers.

The investigation turned up the heat on the alleged scam, but it also left many communities in Birmingham without anywhere to buy even the most basic groceries.

Jamie Williams is among those affected.  She works at the Family Dollar in Titusville, and on a hot afternoon she has the unenviable job of walking around the parking lot picking up litter.

Williams says since the other convenience stores were shut down, Family Dollar has been “swamped.”

“You know, we appreciate the business,” Williams said. “It affected us, and it is affecting the community, because a lot of people depend on the meat markets, yeah so that’s sad.”

Around the corner and across the street from the Birmingham Police Academy, the doors of R&S Meats are blocked with police tape. The store was one of the convenience stores closed in the federal raid. According to locals, it sold everything from meat to beer and cell phone minutes. Family Dollar doesn’t sell meat or beer.  It doesn’t matter that it’s the height of summer and barbecue season

“All we can offer [customers] is the charcoal, the lighter fluid and the grill,” Williams said.

Many people in the community don’t drive or don’t own a car, and on the bus it can be difficult to carry two bags of groceries home on a hot day.

“Those people are almost the equivalent of living in a prison, because they’­re trapped. They are on an island,” said professor Robert Robicheaux, who teaches marketing at UAB’s Collat School of Business. The lack of groceries stores isn’t a new problem in Birmingham’s impoverished communities, Robicheaux explains. The city’s food deserts have been growing for the past three decades.

“The problem has just been ignored,” Robicheaux said. “[The solution] is going to be a creative collaboration.”

For example, Robicheaux says the city could incentivize a local entrepreneur to start up a small grocery store. One of his students came up with the idea of small, refrigerated vending machines full of meat and vegetables that would be placed at gas stations and regularly stocked like to a Coke machine.

One of Robicheaux’s ideas has finally take hold. In February, REV Birmingham’s project, the Urban Food Program, launched a produce truck that delivers fresh fruits and vegetables to underserved neighborhoods.

“By 2021 we will have two more stores,” Tyson said, “because I see the growth. I see the people moving in.”

In the meantime, Tyson says, she’s working with the Birmingham-Jefferson County Transit Authority to reroute the bus that goes through Titusville to stop at the new Publix opening downtown.

Back in the parking lot of the Family Dollar, Angela Williams [no relation to Jamie] explains that in the four-mile stretch between the Piggly Wiggly on Claremont Avenue and Elmwood Cemetery, there are no grocery stores.

“I want to know, where are these big grocery store chains?” Williams said. “This is really untapped potential. People need to eat, and they will come to your grocery store. So where are you?”