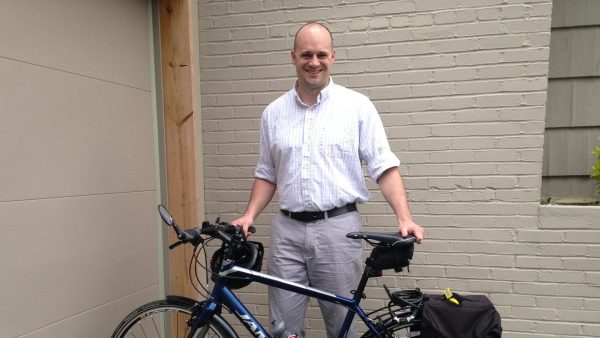 When commentator John Houser lived in Indianapolis, the city built a bike and pedestrian path weaving through the city’s downtown cultural districts.  After trying bike commuting for just a few months, he sold his car — transforming his commute from a stressful ride on city streets into a leisurely jaunt past parks, public art, and along a downtown canal. You can imagine his concern when he moved to Birmingham two years ago…

Anxious about maintaining my car-free commute in my new city, I turned to the internet. Scant information was available, and most of what I found was concerning: Best I could tell, Birmingham was a city spread across mountain ridges,  with virtually no bike lanes or trails, minimal biking culture, scary road raging automobile drivers, and of course, the heat. The challenge appeared daunting, but I wanted to at least give it a try.

One year into my biking commute, I can say that my worst fears were unfounded. My family and I found a home in Crestwood, which, fortunately, does not require me to ride over any mountain ridges to get downtown. After a few hours on Google Maps, inquiries to helpful neighbors, and a little trial and error, I found a couple of safe and reliable routes to work. While bike lanes here are still limited, they are growing across the metro area as part of the Red Rock Ridge and Valley Trail System — a long-term plan for knitting Jefferson County together one mile of trail at a time. Even where there are not bike lanes or trails, Birmingham has plenty of roads with comfortable levels of traffic, filled, for the most part, with courteous drivers who don’t fall on their horns when forced to wait a few seconds behind a guy on a bike. And while the heat has certainly lived up to its reputation, it is dealt with easily enough with a leisurely pace and a change of clothes. Who knew khakis and a nice polo shirt fit so nicely into a bike bag?

However, there’s one thing I wasn’t prepared for in my morning commute, and that was the fragrance of biking in Birmingham.  The Steel City’s spice, if you will. The Iron City’s aroma. Riding along in the spring, for instance, I was struck one morning by bursts of fragrant wisteria in Crestwood, which faded only to be replaced in early summer with the honeysuckle which rambles   alongside 1st Avenue South. Some days it was so strong, I thought I was strolling through the perfume department at Saks Fifth Avenue.

The cool mornings of winter, however, were the best – allowing me to ride through heavy clouds of the day’s first bar-b-que. Heading downtown each morning, I pass first through the deep  smokiness that sits on top of LoLo’s in East Avondale, hoping for a soft breeze to come from the south and place the smoke squarely on my path. From there, I soon roll into the smell of campfire billowing out of Saw’s Soul Kitchen and down 41st Street. And when I’m lucky, I catch a mystery deliciousness that sometimes floats about Lakeview, seemingly coming from no place at all, before I finally arrive at work, just a block from the fire pit at Jim ‘N Nicks. Smoked pork isn’t generally regarded as a breakfast food, but on these mornings I am inclined to reconsider.

Bike commuters will tell you that one of the great things about riding your bike is that you see things you never noticed while in your car, even after driving past hundreds of times. But in Birmingham, seeing is just one of the senses by which you can discover your city anew. If I may humbly suggest: get out your old two-wheeler and take it around town one morning, The Iron City’s aroma awaits.

Commentator John Houser works at the UAB Civitan-Sparks Clinics and commutes to work daily from the Crestwood neighborhood.