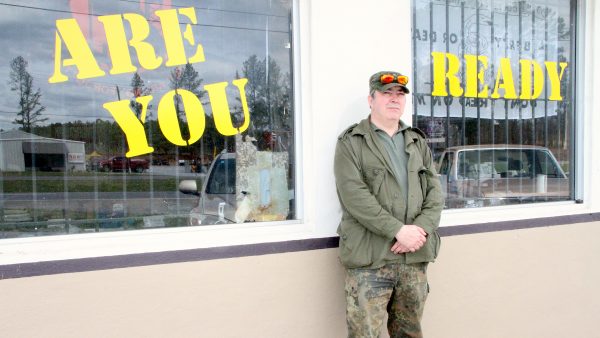 Christopher Price, outside The Prepper Depot and Military Surplus, the store he owns and operates south of Childersburg.

Christopher Price is busily moving supplies from one shelf to another in anticipation of more customers coming through the door of his shop.  Price opened Prepper Depot and Military Surplus in late 2018, in what looks like an old convenience store on Highway 280, just south of Childersburg.  But now, instead of snacks and drinks, military surplus and prepper supplies cover just about every available space.  At the counter, where Price usually holds court, there are a few items for display only, including a rusty 19th-century French rapier he bought online.

“Preppers in general, just tend to prepare for tornadoes, storms, electricity being out. Your vast majority of preppers are not prepping for end of times,” he says.

Price says his shoppers are looking for things like wool blankets, sleeping bags, canteens and food with a 25 year shelf life. But with the recent pandemic, Price says he’s been adding coronavirus supplies to his inventory as well.

Across the country, stores that sell emergency “prepper” food and supplies have seen a significant uptick in business in response to coronavirus fears. That’s especially true in locations with a lot of Mormons.  Steven Wittkop started stockpiling decades ago when he joined the Church of Jesus Christ of Latter Day Saints.

Wittkop and his wife are in the process of relocating from Clay to Hoover’s Bluff Park neighborhood, but fast-tracked that plan when it became clear coronavirus would be coming to Alabama.

Steven Wittkop of Hoover believes “community is as important to prepping as having food in the basement. If you’re going to survive, the community is what is going to keep you alive.”
Richard Banks, WBHM

“Yesterday morning at 5:00 a.m., Bev came into the kitchen while I was fixing my breakfast. She says, ‘Stephen, things are getting kind of crazy. You need to go to the other house to … start moving the food,'” Wittkop says.

He’s had to move 2,000 pounds of food and several large food-grade containers he uses to store water.

“If you have two or three 55-gallon drums and put a drop of bleach in it, so that algae doesn’t grow, it’s better than nothing,” he says.

Getting preppers to talk on the record can be challenging.  As a group, they tend to prefer anonymity, but those who did speak with WBHM said they wanted to clear up one misconception: they’re not all doomsdayers or anti-government isolationists living alone in the wilderness.

“Preppers in general, just tend to prepare for tornadoes, storms, electricity being out. Your vast majority of preppers are not prepping for end of times,” says Price, owner of Prepper Depot and Military Surplus. “You do have your preppers that prepare for the Coronavirus thing—they have their toilet paper, they have their hand sanitizer, they have their food. They have all their basics already, so they have no need to go out and try to find this stuff.”

A British researcher who tracks preppers in the United States says there was a surge in prepping among conservatives during the Obama administration, but once President Trump took office that declined significantly.