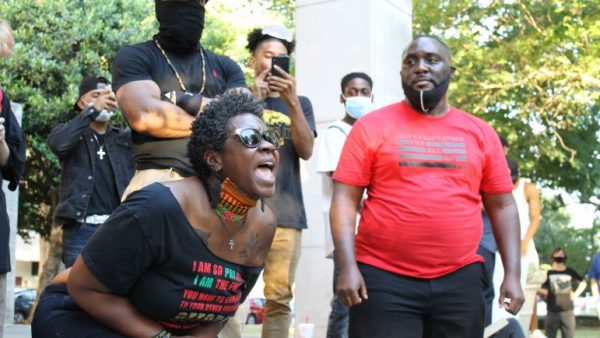 Eric Hall (right) along with community members during a protest in Birmingham.

Civil unrest continues across the U.S. after the death of George Floyd at the hands of police in Minneapolis.  Birmingham’s chapter of Black Lives Matter is hoping to use Floyd’s case to draw renewed attention to the 2018 police killing of Emantic “EJ” Bradford Jr. in Hoover’s Riverchase Galleria.  Eric Hall is a founding member of the Birmingham chapter. He said the current unrest is bigger than Floyd or Bradford.

“We’re still hurting here in our own town because of the death of E.J., who was killed by police officers in Hoover. That pain still exists and we want justice. The people demanded justice and justice hasn’t necessarily been favorable in many cases, as it relates to police terrorism and police abuse.”

“Personally, I did not partake of any of the looting or the destruction of any businesses. But I understand where young people are coming from and I would not try to police that pain for young people. If young people’s message of protest means let’s tear something up to prove a point then I support that for them because that’s their protest; that’s their language, that’s how they feel that they need to be heard. A lot of elders have been calling and asking us to follow the old blueprint of a non-violent protest. I definitely don’t believe in hurting people, but for some, they would argue that that blueprint has not worked. You know, it worked during the civil rights movement. But of course, we are in a new day and a new time. And so the argument for some of the young people that’s damaging property is simply something has to be done. And if we have to make America spend money to replace property, then America needs to spend money. However, the money that America is spending never equates to the cost of the life of a black man who has been killed by the state.”

Marching has started down 20th Street North in Birmingham. pic.twitter.com/7JIFH8HJY8

“We have to be very strategic and intentional with what moving forward looks like, especially if we’re going to talk about the Birmingham or Alabama that we would like to see. That’s going to call for true, genuine leadership. It’s going to have to be a conversation between everyone. That’s the faith based community, business community, our elected officials, our young and old. Everyone has to come together, have a general conversation on what we picture going forward. It’s now time for those who we have elected to now listen and not just listen, but act.”

Editor’s Note: This interview has been edited for clarity and length.