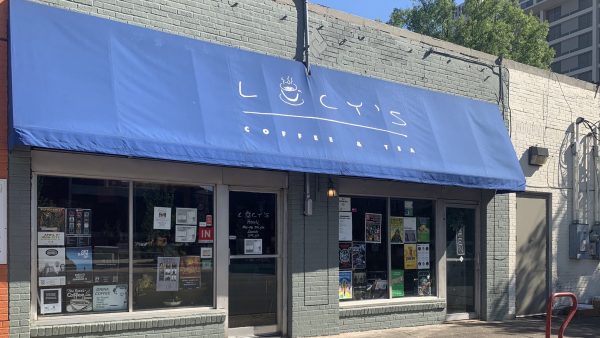 COVID-19 is hitting small businesses hard, including some that have been around for decades. Lucy’s Coffee & Tea has been a Birmingham staple on University Boulevard for more than 25 years. Earlier this week, owner Lucy Bonds announced she’s closing her coffee shop for good.  Bonds said she had a gut feeling in mid-March that her cafe might not survive as the coronavirus began to spread.

“People were starting to talk about things changing and stuff, but we all agreed at the shop that we would go to work on Monday and just be there. But I’m telling you, that day I could just feel it. I mean, my business was just like nothing compared to a regular day. UAB was already talking about working from home. And the dental school, they weren’t going to be there. And, you know, nobody was going to go stay at the Hilton Hotel right there on the corner. So I could, I swear, I could feel it that day that it was just a big shift. So on that day, I told my employees that they were laid off right then, just to start that unemployment thing, and I decided just to ball up and just see if I could have enough money in my bank account to see how things would unfold. But they didn’t unfold very well, as we could see. I knew that it was gonna be a long time before it was ever normal down there. And I just decided I couldn’t do it. You know, financially, emotionally, physically. I just decided it was best to take my 27 years and pack them up and go do something else.”

She served an international customer base:

“I know that a lot of people felt like that was their home away from home. And people were from all kinds of different countries across the world. But they knew that when they came into the coffee shop, that they would be welcomed there. And everybody was welcomed there. You didn’t have any money, it was okay. A big scientists, you know, real important person at UAB, it was okay. I mean, everybody came together there. And really and truly, I mean, I could walk and I could hear people talking in the scientific language and I couldn’t understand what they were saying, or French or Italian or Korean. I mean, there were just people everywhere sharing that space in there together.”

Fond memories at the coffee shop:

“Well, one was my party, when Starbucks left next door and we had a big celebration about that. And then a friend of mine brought her projection system and we watched Obama’s inauguration. We set up chairs in there and it was full and exciting and bustling. And we just kind of quit working all day so we could enjoy that experience together. We’ve had all kinds of fun, little things. We would have special activities, art shows, some concerts there. This couple, I didn’t even know them, but they love coffee and they asked if they could get married in my coffee shop. I mean, seriously, they were not my customers. And she, the bride, was surprising the groom who was the coffee lover extraordinaire. And so she had all these people there in her bridal gown. And she got married one afternoon at the coffee shop.”

Romance with a neighbor:

“So where Starbucks eventually came, he had New York Bagels (restaurant) there. And I would buy bagels from him and he would deliver the bagels out of the back door. And we just started our romance there. And he’s been like a rock for me during all of this because he knows how much it means to me. And we met all of our dearest friends there.”

What’s next for you?

“Right now, I’m working with my old friend Will Shepherd. He owns a pet supply store in Avondale. And he actually used to work at the shop. And then I’ve been making and selling soup at the farm stand in Irondale. And, I might try to run with the soup thing a little bit. I’ve got to figure out a steady income, but I think I just need to relax for a couple of weeks and deal with the stuff in the shop before I really concentrate on what I want to do next.”