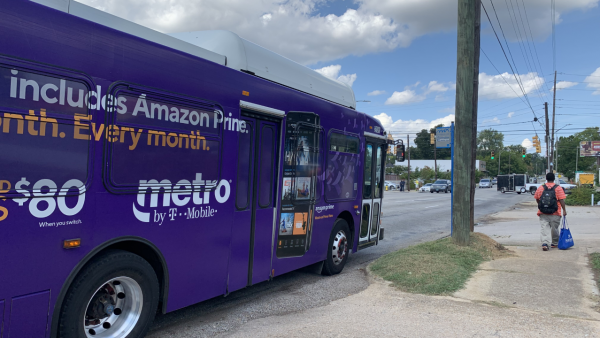 The Birmingham Jefferson County Transit Authority recently rejected a proposed budget that would have increased bus fares from $1.25 to $1.50. It would’ve also cut some bus service. Executive Director Frank Martin recently signed a contract to lead the transit authority. Some say he has a tough road ahead. The bus system is plagued with problems around efficiency and revenue. Martin, in part, blames the transit board, saying they’ve been unwilling to compromise.  He tells WBHM’s Janae Pierre riders aren’t paying enough into the system, and neither is the city of Birmingham.

What’s your response to complaints about broken buses and delayed pickups?

“I have been here since mid-December and very early on I did identify that the on-time performance rates were less than desirable and that we needed to improve there. We realize that the riding public relies on us to pick them up at a certain bus stop on time because they have to get to work, they have to get to school or medical appointments or whatever the case might be. So it’s very important that we are on time. Our planning department has begun to look at the actual times and what’s happening out there on the road. I would have to say that I’m not sure, over the past several years, that they’ve taken a close look at that data and it requires a constant review of going out and making sure that when we put together a schedule that it’s a schedule that the operators can meet, but more importantly a schedule that will work for the passengers as well.”

What’s the biggest issue making finances tight for the BJCTA?

“Based on the overall financial condition of the authority, you are aware that for the past three years the city of Birmingham has underfunded the authority; somewhere between $5-to $6 million dollars per year. And as we now look at the 2020 budget, the city of Birmingham has identified that they will only be giving the Birmingham Jefferson County Transit Authority $10 million. If we need $15- to $16 million, they’re only giving us 10 [million], that means that we’re providing more service than they’re paying for. Since we have been experiencing this for the past three years, we’ve made the decision that we need to modify the service levels where it would match the actual funding that we are receiving from the city of Birmingham.”

Why should cities pitch in with costs?

What changes are you expecting the board to make to the budget?

“That’s a very good question. When the board rejected the budget, I asked for a very clear direction in terms of what their concerns were. I didn’t get any initially. So I don’t know. That’s why we asked the board ‘what are your issues,’ ‘what are your concerns.’ So we’re going to properly analyze what they are and come back to the board with answers to their questions. Short of that, I feel very confident that the budget that we have prepared is a very sound budget. If they have issues, I need to know what they are so I can address them. If I don’t know, I do not know what to address.”