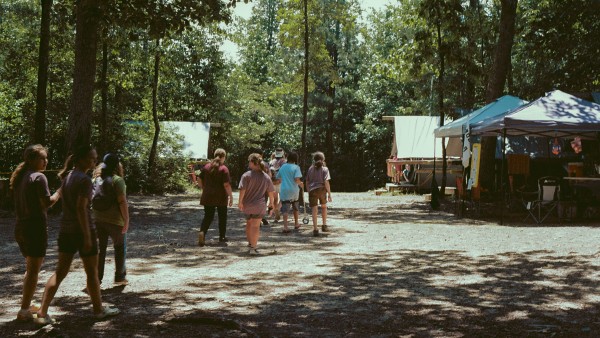 Girls joined boys for the first time at Camp Comer, a Boy Scouts of America summer camp in Mentone.

For decades, vans full of Boy Scouts have traveled up the side of Lookout Mountain, past switchbacks and along the edges of Desoto State Park to make it to Camp Comer Scout Reservation. For that week, the boys trade church basements and civic centers for climbing towers and rifle ranges out in the woods. But this year is different. There are girls at boy scout camp. On this day, a group of about two dozen boys and one girl are preparing to shoot at the rifle range during free time.

Tommie Morgan oversees the range at Camp Comer and gets the group’s attention.

“Alright, gentlemen. There is a lady on the range,” said Morgan.

He’s referring to 14-year-old Olivia Holmes. She’s among the first crop of girls to come to Camp Comer and participate as full-fledged scouts.

“You respect women. You respect women at all times,” Morgan says to the young scouts. “We are going to let the lady shoot before y’all. You always put a woman in front of you. You understand me?”

The boys respond with an enthusiastic “Yes, sir.”

As of May, 64 girls have joined scouting across North Alabama. Holmes says she’s gotten some pointed reactions from other scouts.

“Well, I got asked two times, ‘Is that a girl?’ And another kid said, ‘Yeah, she’s not supposed to be here,’” said Holmes. “That kinda got me mad, but I kinda sorta expected that kind of stuff.”

Malinda Holmes, Olivia’s mother, is a troop leader. She also has two sons in scouts. Since Boy Scouts of America announced last year it will admit girls into more programs, there has been a strong backlash. Holmes says misconceptions have fueled some of that. Some, for example, worry girls and boys will be in the same troop.

“Some of the information they have is wrong,” Holmes says. “They’re not coed. They’re independent.”

Boy troops and girl troops may meet in the same places, but participate in separate meetings. Many of the facilities at Camp Comer have been retrofitted to accommodate both genders. The bathhouses were once big rooms with flimsy plastic curtains between the showers. Now, metal doors have been installed to provide individual private showers.

Some might ask why not just join Girl Scouts? The organizations share similar routes, but have vastly different programs. Many girls say Girl Scouts lacks many of the opportunities Boy Scouts of America offers, including the opportunity to earn the prestigious Eagle Scout rank. That’s a big draw for parent Matt Garrett.

“I think a lot of the girls who have joined, especially the older ones, they’re like 15 or 16, thats their draw,” Garrett says. “They want to pursue Eagle. They want to get the rank of Eagle, because it does have some weight to it.”

Garrett is an Eagle Scout just like his father. He hopes his sons and daughters will be one day, too.

“I always said my daughters were better Scouts than my sons ‘cause they were always, ‘Let’s go camping! Let’s do the hike!’, leading the way kind of thing,” Garrett says beside his daughter’s tent. “Now they have an opportunity to.”

Teen campers Chase Guida and Christian Graley are working on some Bugle Calls along the lake near the amphitheater. They’ve been in Scouts for a few years. Christian says he tries not to focus on the fact that girls are around.

“I mean, I try not to pay attention to it,” Graley says. “I mean, my first encounter was just like, in class and I was like, being my dumb little self. Band kid. You know how it is. And I just said, ‘hey’, and we just carried on a normal conversation. And that was the end of it.”

Guida is a bit more smooth with his interactions. He thinks the concerns about girls changing the scouting program are exaggerated.

By the end of camp, Olivia completed all her requirements for her merit badge classes and now has a total of 10. Her older brother is just a few months away from earning his Eagle Scout rank.

Olivia’s mother Malinda hopes her daughter follows in his footsteps.

“The girls aren’t going to change scouting,” Holmes says. “Scouting is what scouting is, and scouting is a wonderful opportunity.”

Holmes says from where she sits, she only sees positives to having her daughter in the Boy Scouts.