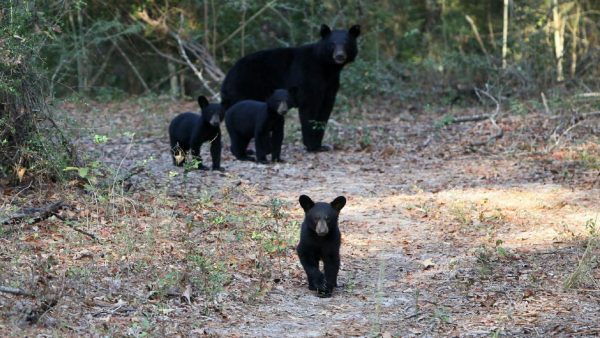 This photo was taken in Saraland, AL. Researchers think the state's black bear population could be at risk due to the disappearance of traditional bear den habitat.

Alabama is home to two different populations of black bears. There is a small group in the northeast around Little River Canyon, which appears to be growing quickly. And then there is a larger group to the south near Mobile. The population there isn’t growing like it should, according to Todd Steury, a wildlife ecologist at Auburn University. Over the past few years, Steury and fellow researchers have noticed a problem in the area.

“We would go in and we’d visit the dens in spring and we’d count two, three cubs,” Steury says. “But then later in April or May we might only see one cub. And so we were very concerned that maybe cubs weren’t surviving.”

Steury thinks this could be related to the disappearance of traditional bear den habitat. In the past, bears along the coast used old hollowed-out cypress trees to rest or hibernate. But there aren’t many of these trees left. Steury says now, bears are making nests in the ground, like big shallow birds’ nests. These might not provide enough protection for cubs.

Steur recently received a $1.1 million grant from the Alabama Department of Conservation and Natural Resources to study the problem.

This bear den is a shallow nest in the ground. Researchers say this type of den might not provide enough protection for bear cubs.

For the next five years, Steury’s team will study this behavior and track the survival rate of black bears throughout Alabama. The research could help stabilize and improve the population, which Steury says is good for the ecosystem.

“It’s something that in conservation circles we call an umbrella species,” Steury says. “In that, if you protect this animal, it serves as an umbrella and it protects a whole lot of other animals too.”

Steury says most people want to protect bears, but they don’t want the animal close by. For those who happen to encounter a black bear, Steury’s advice is to make a lot of noise and back up slowly.