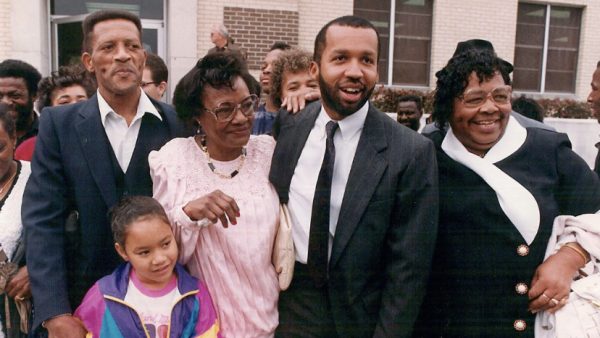 Bryan Stevenson (center) joins Walter McMillian and his family after his exoneration in 1993.

The film “Just Mercy” premieres Friday in Montgomery. It’s based on civil rights attorney Bryan Stevenson’s efforts to free Walter McMillian, who was wrongfully charged with murder in 1988 and sentenced to death row. A year later, Stevenson founded the Equal Justice Initiative, a Montgomery nonprofit that defends people who may have been wrongly convicted, often due to the color of their skin.

“Had it not been for EJI, there’s no doubt in my mind I would have been executed by now,” he says.

In 1985, Hinton was convicted of murdering two fast food restaurant managers in Birmingham. Hinton told detectives he didn’t do it, but he says they didn’t care.

“He [the detective] said ‘but since y’all always taking up for one another, take this rap for one of your homeboys who truly did it,'” Hinton says. “And that cost me 30 years of my life.”

Thirty years. That was how long Hinton spent on death row before the state exonerated him in 2015.  Decades later, wrongful convictions are still not unusual in Alabama. Kira Fonteneau is the former public defender for Jefferson County.

“Not much has changed,” she says. “The conditions that set people up to be wrongfully convicted still exist in the system today.”

Take race, for example. Fonteneau says people of color are being locked up for things they didn’t do.

“And we see that because there are a lot of things that go along in the criminal justice system that often will make it either easier for people to plea or for their version of the events not to get told in trials,” she says.

Fonteneau says often times people of color can’t afford an attorney or an expert witness ⏤ two things that are vital in many cases.

Carla Crowder is an attorney and executive director of Alabama Appleseed, an advocacy group that focuses on criminal justice issues. She says in Alabama, people of color are at a major disadvantage because of structural racism across the entire criminal justice system.

“You have vastly disproportionate numbers of white prosecutors and district attorneys,” Crowder says. “The appellate courts are entirely white and the Alabama Supreme Court.”

That’s why many civil rights attorneys believe Stevenson’s work, chronicled in his memoir, is so important. They say he’s leveling the playing field to make sure people have the legal representation they need to fight a system much larger than themselves.