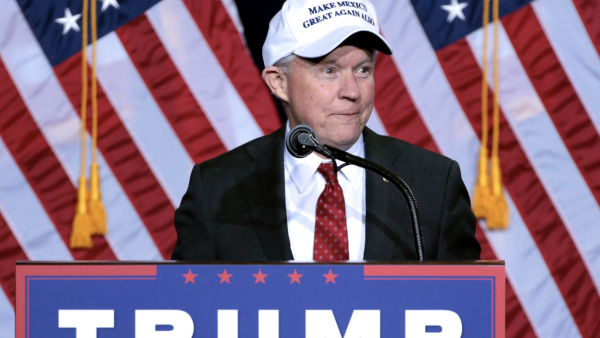 U.S. Senator Jeff Sessions of Alabama speaking to supporters at an immigration policy speech hosted by Donald Trump at the Phoenix Convention Center in Phoenix, Arizona.

Jeff Sessions wants his old job back – not his job as U.S. Attorney General, but as Alabama senator. GOP sources tell NPR that Sessions is going to soon announce his campaign for the Alabama Senate seat that he held for 20 years. The person currently in that seat is Democrat Doug Jones, who is considered to be the most vulnerable member of the U.S. Senate.

Sessions was the first senator to get behind President Donald Trump’s campaign, long before Trump’s plan to build the wall. He was a border hawk and had Trump’s ear on immigration policy.

But Sessions’ comeback bid is complicated by his soured relationship with Trump. Sessions stepped down as attorney general after being repeatedly mocked by Trump, angered that Sessions recused himself from special counsel Robert Mueller’s Russia investigation.

The question is how voters will respond now that Sessions is out of favor with the president. Trump has his highest approval rating in the country in Alabama.

Other GOP candidates, including Congressman Bradley Byrne, and former Auburn football coach Tommy Tuberville, promised to stand with the president. Tuberville tweeted that Sessions failed the president at his greatest point of need. The qualifying deadline is Friday.

Jeff Sessions entrance into this race is not a surprise. He’s been out of the swamp for less than two years, and now he’s itching to go back. He’s another career politician that the voters of Alabama will reject. As AG, he failed the President at his point of greatest need.

Follow NPR’s live coverage of the 2020 Super Tuesday contests, including results and analysis.

Jeff Sessions is making a play for his old senate seat from Alabama, arguing he’s the one who has Trump’s back despite the president’s disparaging remarks about his former attorney general.