How Prepared is UAB Hospital for a Mass Shooting? 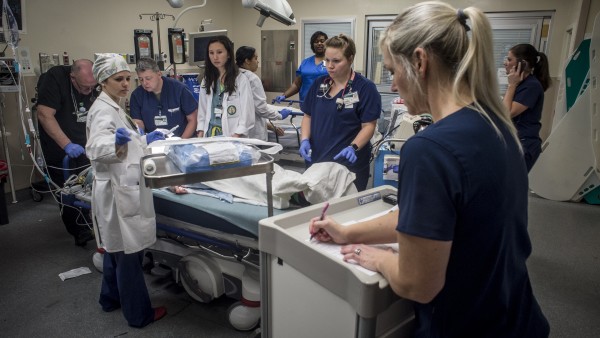 UAB Emergency Department staff working on patients in the trauma bay of the Emergency Room.

Mass shootings are increasingly common across the U.S. Just last weekend, two separate events in Texas and Ohio killed more than 30 people and wounded dozens more. Kerby says each emergency is different, but UAB has a plan.

“You know we have an internal process for mass casualties, disaster response, that we plan for, that we drill, so that everybody’s prepared, everybody’s ready and sort of knows what to do if something like that happens,” Kerby says.

“We have patient actors and… law enforcement and fire and our researchers are doing the rescues for real and they’re transporting for real to our emergency rooms,” Mayfield says. “And the example in December, we deliberately tried to overload our ER’s to push them to their max.”

He says they add to this preparation by reviewing government documents and first-hand reports to gain insight from actual events.

The hospital has also learned from its own experiences. In 2011, when tornadoes ripped through Alabama, UAB treated over 100 patients in one night.

Whether it’s a natural disaster or a disease outbreak, Mayfield says the goal of emergency preparedness is to quickly establish a system to assess patients and coordinate care. But he says a mass shooting would present specific challenges.

“You typically get really short notice on an event like this and you get patients relatively quickly,” Mayfield says.

And those patients are more likely to have gunshot wounds. Kerby says UAB is well-prepared for these kinds of injuries. As Alabama’s busiest level-one trauma center, the hospital treated 700 gunshot wounds last year. Still, Kerby says there is a chance of falling short in an emergency.

Both Kerby and Mayfield say the bigger concern is managing those resources, not only to ensure a steady supply of manpower, but also to make sure caregivers have time to care for themselves during such a traumatic event.