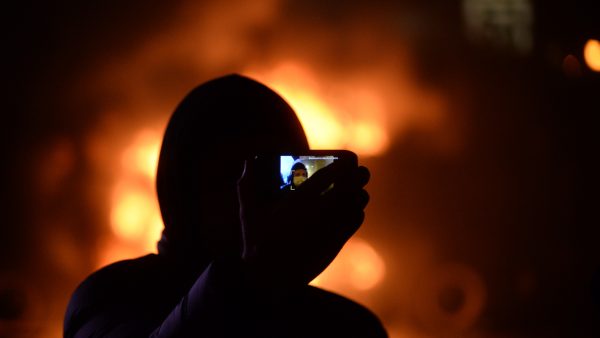 Editor’s Note: The original version of this story said that Hoover police warned Carlos Chaverst to remove his mask. Chaverst’s arrest was based on video evidence during a demonstration. It is unclear whether he was warned prior to his arrest.

Protesters at a Walmart in Hoover chanted “no justice no peace” one night last month as they approached the entrance. There have been several similar demonstrations in the wake of the fatal police shooting of a black man at the Galleria mall on Thanksgiving. At one of those demonstrations, police arrested protest leader Carlos Chaverst. They charged him with disorderly conduct and loitering for wearing a mask. It’s one of the more antiquated laws in Alabama.

Chaverst says his face was covered that night, but he wasn’t wearing a mask.

“It covers my entire face but is literally meant for you to wear to keep from the cold, to keep the cold air out of your face during the wintertime.”

He says he just wanted to keep his face warm. Most of the protests Chaverst organized have been outside. The night he was arrested, temperatures dropped to nearly 25 degrees.

Hoover City Administrator Allan Rice says police warned Chaverst to uncover his face but he refused. That brings us to an obscure section of the state’s loitering law. It says a person wearing a mask in public can be charged with loitering. But the legality of that loitering law is questionable, says Robert Kahn, law professor at the University of St. Thomas. “I think using the law the way it was used against the protest leader is unconstitutional” Kahn says.

Over the last decade or so there have been numerous challenges to mask laws across the U.S., including by the Ku Klux Klan. Kahn says the arguments have led many states to change the language of the law, adding the “intent to intimidate.” But Alabama’s law includes no such language.

Sanders says Alabama has a long history of using loitering laws to disenfranchise African Americans. He says after the Civil War and during reconstruction, the state passed several loitering laws to put black people in jail, and Chaverst’s case is no different.

“This is another misuse of the concept of loitering; it is used to oppress people and repress people” Sanders says.

This isn’t the first time police have used the charge of loitering to silence protesters. In 2017, officers in Auburn threatened to arrest masked demonstrators outside an event featuring white nationalist Richard Spencer. The event attracted anti-fascist protesters. Many of them covered their faces with bandanas. “That could be very politically intimidating to the police officer, but that can’t be a reason for applying the mask law,” Kahn says.

Both Kahn and Sanders believe Alabama’s mask law should be repealed or amended as it has been in other states. Meanwhile, Chaverst plans to challenge the charges and the mask provision in court.