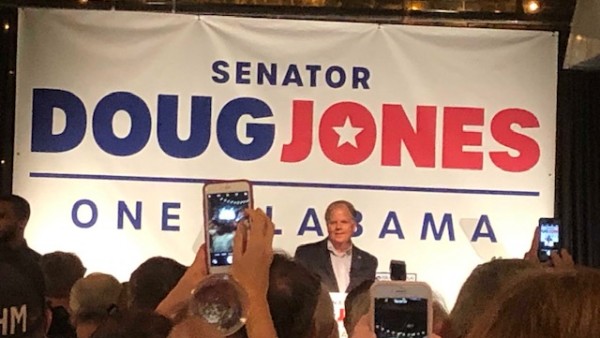 Doug Jones is considered the most endangered Democrat in the Senate. He’s a target for Republicans in the 2020 election who want the seat back. He launched his re-election campaign Sunday, challenging voters to look at his record instead of the labels cast on him by his opponents.

In 2017, Jones became Alabama’s first Democratic Senator in more than two decades. He upset Republican conservative Roy Moore in a defeat observed around the world.

Speaking to a crowd at the B&A Warehouse, Jones talked about his “One Alabama” theme of unity in the state. “There is more that unites us than what divides us,” he says.

Jones told supporters he will win again in 2020, but it won’t be easy.

“Don’t get me wrong. I know that election was close. I get it,” Jones says. “And I’m not foolish enough to think that this one won’t be close as well. It is.”

Jones ticked off a list of accomplishments, including funding for rural WiFi and getting more money for historically black colleges and universities. He says he made some of those things happen by working with politicians across the aisle.

That’s one thing that caught the attention of retired lawyer Mike Weathers, who drove from Florence to attend the event.

“I think he has certainly, already, in the short period of time he’s been in the Senate demonstrated his ability to try to work with the folks on the other side of the aisle,” Weathers says.

Carole Marks, chair of the Shelby County Democrats, says for Jones to be re-elected, black and white Democrats have to work together.

“We have to get them motivated to go to the polls,” she says.

On the Republican side, Roy Moore, U.S. Rep. Bradley Byrne, former Auburn University football coach Tommy Tuberville, and Alabama Secretary of State John Merrill are among those running for the seat.

Your Guide To Alabama’s 2020 Constitutional Amendments

Changes to voting, the judicial system and the Alabama Constitution itself are on the ballot.

The Jefferson County Commission voted unanimously Friday to open the courthouses in Birmingham and Bessemer for in-person absentee voting.