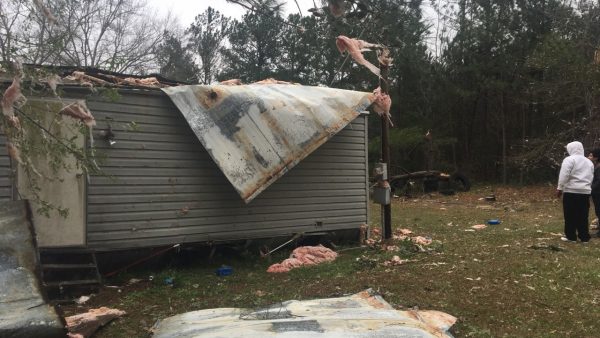 Johnny Washington, in white, was asleep in bed when the tornado struck. His immediate family is safe, but some of his friends and extended family died in Sunday's storms.

The death toll stands at 23 and dozens are missing following the severe tornado that ripped through Lee County and left behind a wake of debris and destruction. At least three children were among the fatalities. It was the deadliest U.S. tornado in almost six years.

Lee County Sheriff Jay Jones said the path of the tornadoes was almost a mile wide. Survey crews with the National Weather Service were in Lee County Monday to assess the damage from the storms. Officials said the powerful twister carried winds estimated at 170 mph. “It looks like someone almost just took a giant knife and scraped the ground,” Sheriff Jay Jones said.

About 200 law enforcement officials joined in the search Monday to ramp up recovery efforts. They scoured the area for survivors who may have been buried under the rubble. Drones, K-9 units, and helicopters from various state agencies were also being used in the recovery phase.

@GovernorKayIvey is scheduled to hold a press conference along with Sheriff Jones and someone from the Emergency Management Agency at 1 p.m.

Johnny Washington was asleep when the tornado touched down near his home in Lee County Sunday afternoon. He said his odds of surviving were low; he hid under his bed for protection. “After what I woke up and seen this morning, I’m in shock I’m still here,” he said.

Jones said it would be a difficult day. “I’ve not seen this type of level of destruction ever in my experience here in Lee County, and that covers a span back for at least 50 years,” he told reporters at an early morning briefing Monday. Dozens have been treated for injuries ranging from mild to severe at area hospitals.

All roads have reopened, but access to some remains restricted. He was optimistic the Beauregard community would rebound from the disaster. “This is a very tight-knit community,” Jones said. “These people are tough, they’re resilient people. And it’s knocked them down, but they’ll be back.”

Next door to Washington, Patricia Moore helped her sister clean up her house after winds knocked down multiple pine trees. Some of her family members and friends died in the storm. But Moore said there is some good to come out of the tragedy. “I don’t know I just think God is really trying to get people together, and seeing that that’s what’s going on now just looking around at everybody helping each other,” she said. “It’s amazing.”

At an afternoon news conference, Gov. Kay Ivey thanked Jones for his leadership. “You’ve been the quarterback, and we thank you,” she said.”Y’all we will overcome this loss. We’ve done it before. We’ll do it again. And we’ll do it together.” Jones said he’s received calls from sheriffs all over Alabama offering to help. There’s been an outpouring of support on social media for the tornado victims and their families. Apple CEO Tim Cook, who attended nearby Auburn University, was among them.

Devastated to hear about the lives lost in Lee County, a place close to my heart. Wishing strength and healing for all those affected by today’s tornadoes. — Tim Cook (@tim_cook) March 4, 2019

President Donald Trump offered his support, adding that he’s ordered the Federal Emergency Management Agency to give Alabama “the A Plus treatment” in the rebuilding efforts.

House Speaker Nancy Pelosi weighed in Monday as well. “In the wake of these deadly tornadoes, federal, state and local authorities must do everything in their power to assist the rescue effort and provide all necessary resources to help those impacted by this disaster now and on the long road to recovery,” she said in a statement.