Biden at 16th Street Baptist Church Commemoration: ‘Hate is on the Rise’ 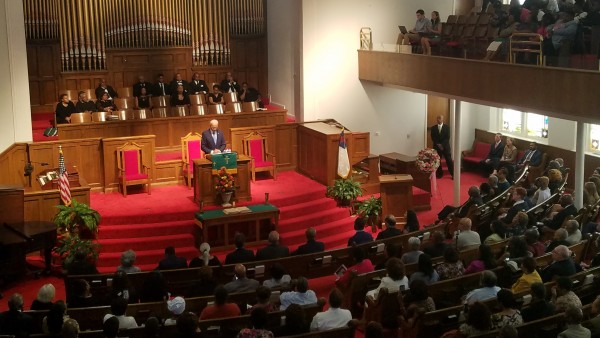 Democratic presidential candidate and former Vice President Joe Biden spoke at the memorial observance for the 56th anniversary of the bombing of the 16th St. Baptist Church.

“We have gathered 56 years later to continue telling the story,” Segres said, “a story that America cannot deny, and we will not allow to be forgotten.”

Birmingham’s 16th St. Baptist Church is on the National Register of Historic Places.

Later in the service, former Vice President and Democratic presidential candidate Joe Biden spoke to the congregation. He said remembering the past is especially important now.

“We are in the battle for the soul of America,” Biden said. “And here at historic 16th Street Baptist Church, there’s no more powerful reminder of what’s at stake.”

Biden said the “same poisonous ideology that lit the fuse at 16th Street” is responsible for several recent mass shootings across the U.S.

“We have not relegated racism and white supremacy to the pages of history,” Biden said. “But the greatness of this nation is that we still strive to.”

Church officials displayed a photo of the four girls killed in the bombing on September 15, 1963.

At 10:22 a.m., church officials rang the bells to mark the exact time that the bomb exploded 56 years ago. On September 15, 1963, members of the Ku Klux Klan planted a bomb at the historically African-American church, killing four young girls and injuring others.

During Sunday’s service, the crowd recognized Carole Robertson, Cynthia Wesley, Addie Mae Collins and Denise McNair, who were killed in the attack.

Parishioner Armond Bragg, who has been a member of the 16th Street Baptist Church for over 60 years, said the tragedy was a defining moment for the civil rights movement.

“Oh this is history to us,” Bragg said. “On the backs of those girls, we achieved the Voting Rights Act. So those girls have sacrificed a lot for the black community.”

Bragg said he was glad Biden spoke at the memorial service. He said Biden has long fought for civil rights, even before being chosen as former President Barack Obama’s running mate.

The memorial observance ended with the crowd joining hands and singing “We Shall Overcome.” Later in the day, Rev. Eric Manning, pastor of Mother Emanuel AME Church in Charleston, South Carolina, preached at the 11 o’clock church service. Officials with the 16th Street Baptist Church also planned to unveil an updated exhibit to commemorate the victims of the bombing.