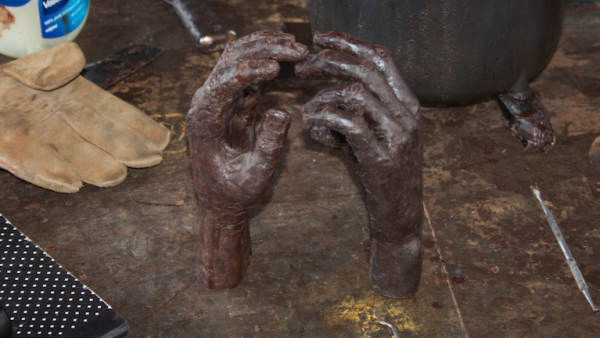 Sloss Furnaces was Birmingham’s symbol of the steel industry giving it the nickname, “Magic City.” After halting production of pig iron in 1970, a grassroots effort prevented the site from being torn down.

Almost 40 years ago, Sloss opened as a national historic landmark and to its first curator, Paige Wainwright, it was critical to continue pouring iron.

“It was really [Wainwright’s] idea to start a metal arts program, and it started with blacksmithing in the 80s,” said Karen Utz, Sloss’ historian and interim director.

Students creating their projects at the Sloss’ Summer Youth Apprenticeship.

Utz said the metal arts program attracted welders and sculptors, some with degrees in architecture and metallurgy. These individuals became instructors in the program and taught different ways to make things out of metal.

“That opened the door for other young people to come in and start a new career [in welding or metal art] that perhaps they would have never had the chance to before,” Utz said.

They do it through Sloss’ Summer Youth Apprenticeship which helps mold young casters.

Ajene Williams was a student worker in the program just eight years ago. He’s now an artist and trainer.

“It’s important to teach this art to the youth, and give them that spark I got when I got into summer youth program,” Williams said.

I went to Sloss to get a peek of the students’ work and met Everett Fasking. He has always been fascinated with iron casting and sculpting and said he’s admired it from a far.  But these days he’s up close and personal with a mold of hands.

“I took a fascination with the kind of overwhelming power that they have,” Fasking said. “They can create they can destroy. And that’s kind of the power that I wanted to harness in my sculpture.”

Fasking, a senior at Alabama School of Fine Arts, said the program has taught him different skills like welding and torch cutting.

“I can go into so many different fields with [those skills] alone,” he said.

Welding is a high-paying trade and is also in high demand, which Fasking said opens the door to other possibilities.

“This program gives a person so many opportunities to do whatever they want. Personally, the dream is to become a professional sculptor,” Fasking said.

Sloss’ mission is to give people a sense of the significance of industry through education and hands-on experience with metal arts, and the summer Youth Apprenticeship stays true to that objective. Birmingham’s history and future flows through Sloss Furnaces, which now takes a more artistic cultural approach compared to the days the city’s economy ran on pig iron. 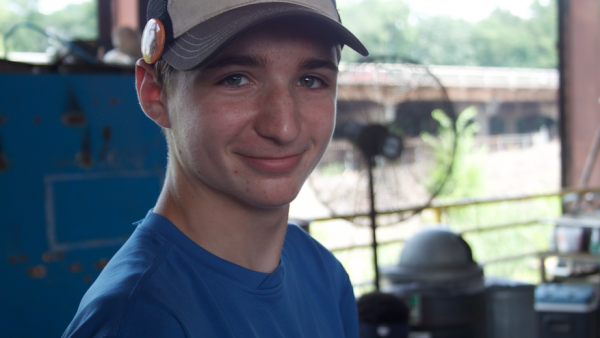 Everett Fasking is a student in the 2018 metal arts apprenticeship program.

Ajene Williams went through the program and is now an artist and trainer.

Students working on their projects.