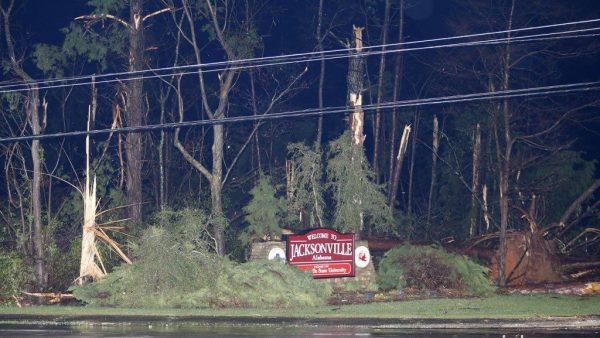 Crews with the National Weather Service are assessing damage Tuesday morning after severe storms tore through the area. Jacksonville city officials in a Tuesday morning press conference confirmed there were no fatalities, but some buildings around Jacksonville State University have severe structural damage. There’s been looting, Jacksonville Assistant Police Chief Bill Wineman said, and officials are imposing a 7 pm curfew. The campus is off limits. Several roads are closed to allow Alabama Power crews and tree trimmers to work today.

Calhoun and Cullman counties had the heaviest damage from large hail and winds, which destroyed several homes and businesses. In all, 13 counties were affected by the storms, said Yasamie Richardson, spokeswoman for the Alabama Emergency Management Agency. “I think everybody was shocked just to see the size of the hail that fell … the sheer volume and the size of it was something I don’t think any of us expected,” Richardson said.

There were reports of injuries, but none was life-threatening. Richardson attributes the lack of fatalities to residents heeding warnings to retreat to safe spaces.

Jacksonville State University was in one of the hardest-hit areas. JSU students are on spring break. The City of Jacksonville implemented a curfew Monday night so emergency workers could better respond to the storm. Crews with Alabama Power were working to restore electricity to more than 10,000 homes and businesses. Workers are cleaning up downed power lines and trees.
As of this writing, some parts of the JSU campus are still off limits.

Hwy 21 & 204 is now open. JSU, Gamecock Village & Reserve are off limits. Do not travel NE area if at all possible. There is much debris, downed power lines, and trees. First Responders and Alabama Power are working diligently in those areas.

Gov. Kay Ivey in a statement Monday night said she was sending state resources to the areas hit by the storms. Richardson said several unaffected counties sent their emergency responders to help assess the damage.
Schools in Calhoun and Cullman counties are closed Tuesday.