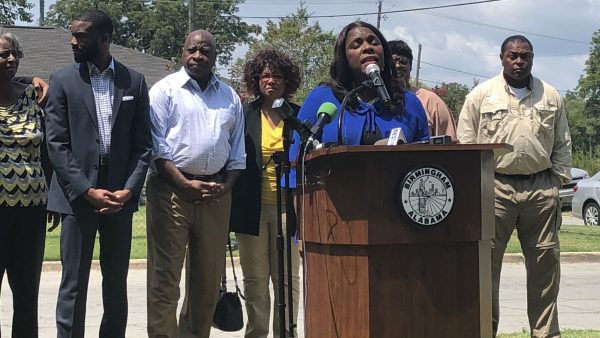 Congresswoman Terri Sewell speaks on Wednesday, August 22, 2018 in Collegeville near a home where soil has been replaced through the Environmental Protection Agency's clean up of contaminated soil.

More than 500 properties in North Birmingham have not been tested for contamination, Congresswoman Terri Sewell said Wednesday while touring Collegeville with city, state and EPA officials. She’s encouraging people who have rejected soil testing to allow EPA to check for contaminants.

“We understand some of the citizens may be distrustful, but it’s important for us in order to truly have cleanup that is comprehensive for us to get those sites that have not been tested, tested,” Sewell says.

There’s been a lot of attention on this cleanup lately because of a federal corruption trial that ended last month.  A lawyer with Balch & Bingham and a coal executive with Drummond Company were convicted for their role in a scheme to discourage property owners from getting their soil tested for contamination. Former state Rep. Oliver Robinson also was involved in the scheme.

Neighborhoods such as Collegeville and Fairmont are located near large industries that have polluted the area for years; one of them is ABC Coke, a Drummond company.

Sewell says soil has been removed and replaced already on more than 390 properties. Work still needs to be done on 127 contaminated properties. But there are still residents who refuse testing, or the property was vacant, she says.

The federal government has spent about $20 million on the North Birmingham Cleanup since 2014, according the Environmental Protection Agency. Sewell says polluters should bear some of the cost for cleanup.

“The only money that has been spent for the removal process has been federal funds coming from the EPA,” she says. “No potential responsible party has given any resources toward this clean up.”

Mayor Randall Woodfin says in addition to the EPA funds for North Birmingham, he wants to involve more agencies in restoring and revitalizing the impacted neighborhoods.

“What we’re committed to is making sure that this area gets the resources, focus and attention it needs to make sure that residents here where they live are safe,” Woodfin says.

The Jefferson County Department Health was not represented at the press briefing. Jefferson County Health Officer Dr. Mark Wilson and Sewell said the health department was not invited because of miscommunication.

Wilson said the health department is concerned for the health and well-being of North Birmingham residents and all of Jefferson County.