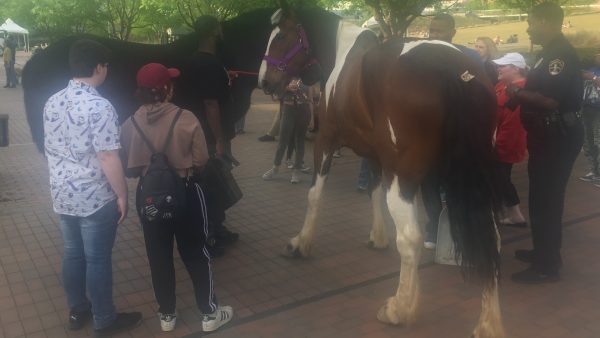 People gather to get a glimpse of Big Boy and Sissy at Railroad Park. The horses will soon be pulling carriages around Birmingham

In a few weeks, horse drawn carriages will be plodding around the streets of Birmingham, taking people around the city. The city council unanimously approved the carriage service last week. Some are excited about the new service, while others have serious concerns

Big Boy and Sissy are two huge, draft horses. Next month, they’ll be working downtown — pulling carriages full of tourists and residents who want a different view of the city.

Frank Tate is the owner and operator of the Magic City Tours, a carriage company. Last Saturday, he took Big Boy and Sissy for a walk around Railroad Park. He wants to familiarize them with the area they’ll be traveling.

“Both of these are pulling horses. That’s what they were bred for,” Tate says. “Sissy is 8 and Big Boy is 12.”

These tall, muscular horses drew lots of attention. People stopped and asked questions. And then there were prom goers in the park posing for pictures. They wanted photos with the horses in the background.

Not everyone is excited about the horse and carriage rides. Sara Bush, a small business owner, launched an online petition last week opposing the service. In three days, she collected 4,000  signatures. She wants the city to prohibit the carriage rides.

“A lot of people are really opposed to this,” she says. “If they were to actually allow this to happen, I really hope that they would reconsider the ordinances and make sure  there were more protections in place.”

Bush wants to be assured of protections for the horses’ health. She says she worries the animals will have to work long hours in the Alabama heat and that there will be problems with traffic.

“They take up a whole lane of traffic.  You’re going to have cars whizzing by them, trying to swerve around them to try to avoid the horse carriages,” she says. “It’s going to be very dangerous for the horses and also for the passengers riding.”

“I don’t think anyone on the council would condone animal cruelty,” Woodfin says. “It’s just not going to happen.”

Woodfin says the city has laws on the books to govern carriage operations.

Bush would rather see pedal bike carriages in Birmingham.

But Tate, the carriage company owner, says he plans to offer horse-drawn carriage rides only. He says they’ll be  available about three or four hours a day.

The horses will take passengers through areas including Midtown, Uptown, the Downtown Civil Rights District and Avondale. He’s also considering parking around some hotels.

Tate says he’s working with the city’s traffic and engineering department on his carriage routes.

Tate says no one has contacted him directly about their concerns, but he wants people to rest assured.

Tate is spending the next few weeks preparing the horses and wrapping up the  final steps with the city so the rides can start around the end of May.