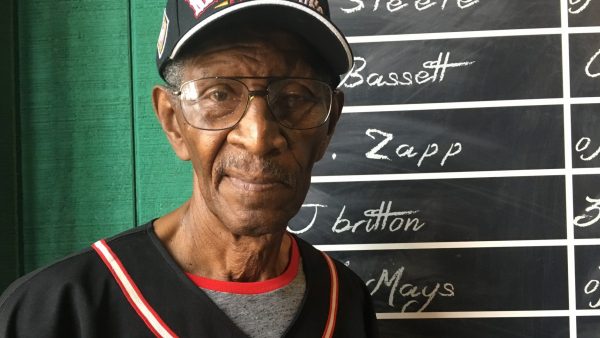 James "Jake" Sanders played in the Negro League at Rickwood Field in Birmingham.

Segregation shut out ballplayers like James “Jake” Sanders from ballparks and the major leagues, but it didn’t quell his passion for the game.

He attended the same high school in Fairfield as Willie Mays and went on to star in the Negro League. These days, Sanders travels the country telling the history of the league to school kids so the stories don’t get lost.

Sanders turns 84 this month, and he still loves to talk about baseball. He grew up playing in the streets of Fairfield, using a broomstick and tennis ball. He didn’t have the real equipment.

When he was about 12, Sanders’ father took him to a Negro League game at Rickwood Field. He saw Toni Stone, a female playing second base. He decided, if she could play baseball, he could do the same.

Sanders traded that broomstick for a bat – and later played in the Negro League for the Birmingham Black Barons, the New Orleans Bears and several other teams.

He still remembers the huge crowds that came to watch the Negro League games.

“There’d be so many people in Birmingham, they’d have to put a line down the third and fourth base line,” he says. “I’ve played before 50,000  people in the Negro League.”

The Negro Southern League Museum in Birmingham has Sanders jersey and the the last bat he played with.

A lot of Negro League History still lives in Birmingham. Nine Birmingham-area players went to the Major League after integration.

Sanders enjoys talking about his friends, such as Rev. William Greason, a Birmingham minister.

“His curve ball was so good. He could throw a curve ball and it could wrap around a house,” Sanders says of Greason. “He went on to play in the Major League with the St. Louis Cardinals.”

Not all of his memories from the early days of baseball are good. Sanders remembers getting cut from LA Dodgers Farm System in the 1950s.

When another Major League team tried to recruit him, Sanders turned them down.

Sanders and other Negro Leaguers players get some recognition now. Congress issued a proclamation in 2002 recognizing the league as part of the Major League.