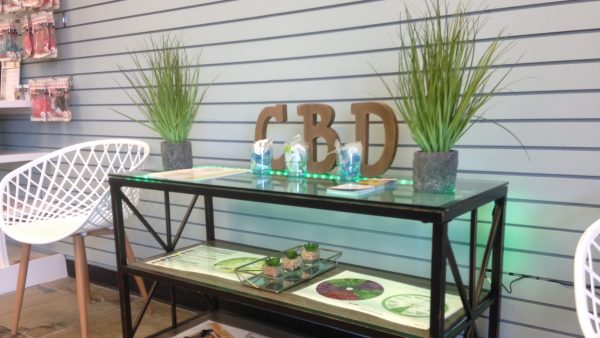 A display at the Birmingham CBD store offers information about the substance.

The CBD Store in a strip mall along Highway 280 in suburban Birmingham, looks like a typical health and wellness shop. A decorative waterfall gurgles against the light blue walls. Capsules that look like vitamins, creams, drops taken orally and candies line the shelves. They’re all infused with CBD.

People seeking an alternative to pain medications or anti-anxiety drugs are increasingly turning to CBD oil. Some athletes even claim it helps with post-workout recovery. Others say it helps with chemotherapy and arthritis. Studies have shown it curbs severe epilepsy.

That array of claims has made it easier to find CBD products in Alabama. Besides this store in Birmingham, there’s a similar store in Northport. Another is expected to open in Auburn.

The CBD Store in Birmingham sells mixes for cakes and brownies infused with CBD.
Andrew Yeager,WBHM

But there’s just one problem: CBD is derived from marijuana. Marijuana is still illegal under federal law.

Birmingham CBD Store owner B.J. Autry says his products are legal because they are are derived from industrial hemp.

“There is a distinction between industrial hemp and marijuana,” Autry says.

Autry adds hemp contains little or no THC, the chemical that causes the high from marijuana.

Some in law enforcement say that doesn’t matter.

“Whether it comes from hemp or comes from a marijuana plant, it’s illegal,” Lauderdale County District Attorney Chris Connolly says.

In August, Connolly and other local officials held a press conference to set the record straight. They said except for people with several medical conditions who are exempt by Alabama’s Carly’s Law and Leni’s Law, CBD is illegal in Alabama. His office received complaints about CBD products tied to pyramid schemes and unregulated products showing up in convenience stores. Connolly says they will enforce the law.

“It’s like when they come in here and set up illegal gambling machines,” Connolly says. “Some people may say that’s a harmless activity and we ought to let it happen. But the fact of the matter is gambling is illegal in the state of Alabama at this time as is CBD.”

In March, state authorities raided a warehouse in Shelby County seizing what they said was CBD-infused candy and other products.

So what is the answer? Is CBD legal?

Rob Mikos, a law professor at Vanderbilt University who specializes in marijuana law, says retailers across the country may claim it’s legal.

“I think in part it’s based on confusion,” Mikos says. “The law in this area is very complicated.”

Mikos says there are three ways CBD is legal under federal law.

First, the Food and Drug Administration has approved CBD to treat two rare types of epilepsy. But that only applies to a specific drug.

Finally, it depends what part of the cannabis plant the CBD comes from. Legally, the leaves are considered marijuana; the stalk is not.

CBD Store owner B.J. Autry says his products are above board and he has documentation to back that up. He says he hasn’t had any trouble with law enforcement, nor is he bothered by the association with marijuana.

“I can feel good about it,” Autry says, “because I know in my heart that the only thing I’m trying to do is help people here.”

Autry’s customers may see relief in CBD oil. The law appears to see something else.