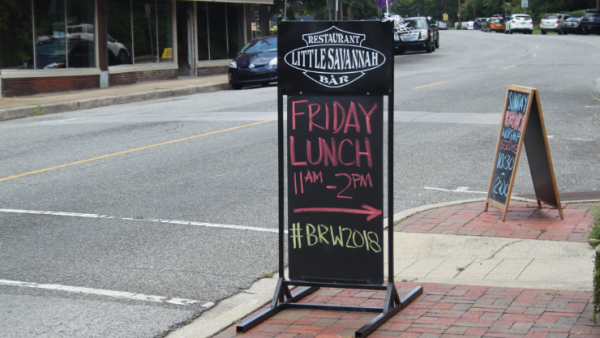 This sign outside of Little Savannah reminds passers about Birmingham Restaurant Week.

Three courses for $30 is the going rate for dinner at many eateries during Restaurant Week, which runs through Sunday. Eric Velasco writes about food in Birmingham and he says it’s the perfect time to check out some good eats.

“Restaurant Week I think is a great opportunity to try new places to go to places you might not have gone to before,” he says.

I went to see Little Savannah Chef Clifton Holt on day one of Restaurant Week.

He’s serving roasted corn and bacon chowder, pork shoulder steak and a chocolate mousse for dessert. I asked him how he prepares for the 10 day event.

Basically, that means he has to create a menu that’s inexpensive for the restaurant and the customer without skimping on quality and freshness. But that’s not always easy to pull off. In fact, that’s why some Restaurant Week deals are better than others.

“Its limited in that you have limited opportunities of what you get a bargain for,” Velasco says.

The main idea behind Restaurant Week is to get people in the door – especially new customers. But some restaurants would rather concentrate on their regulars. Taso Toulopis, owner of Ted’s Restaurant, a meat and three near UAB, says he doesn’t use up time and energy on attracting new customers,”but rather than to appreciate the existing customers because they’re my bread and butter,” he says.

Ted’s is skipping Restaurant Week this summer. For Toulopis, it’s just not worth the headache of coming up with a custom menu.

“I don’t think that restaurant week is designed to increase business for the business,” he says.

So is Restaurant Week worth it? To customers, maybe.  To chefs and restaurant owners, it just depends on the menu and where ya eat.