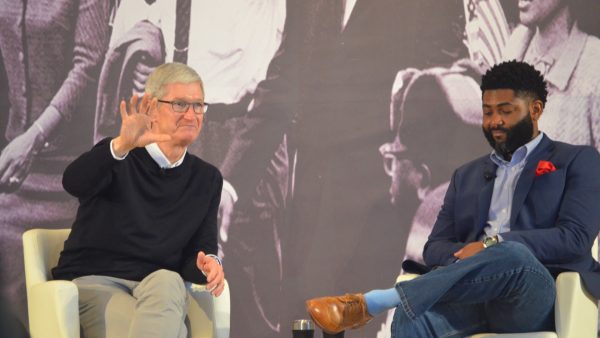 Apple CEO Tim Cook speaks at a forum on April 4, 2018 with Anthony Hood, a professor in UAB Collat School of Business.

The SCLC is honoring Cook with a human rights award in commemoration of the life of King. Drawing from the words of the civil rights leader, Cook had advice for students. “The world needs you more than ever to not be silent,” Cook said. “It’s not the behavior and the actions of the evil people that we will remember in the end, but the silence of the good people.”

A student asked Cook to give advice to a young person who wants to become the future CEO of Apple.

“So he wants my job,” Cook said. He advised him to prepare so that he’s ready for opportunities.

Another student asked Cook to name his favorite Apple product.

“That’s sort of like asking you who your favorite child is. You really love all of them,” Cook said.