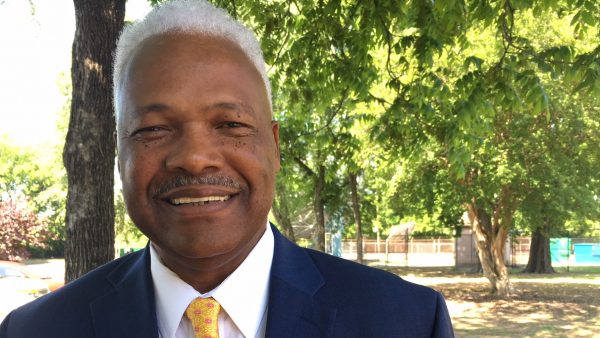 Democrat James Fields says when he ran for a seat in the Alabama House in a 2008 special election, many urged him to withdraw. He won a two-year term and is now running for governor.

Democrat James Fields was the first African American to run for a legislative seat in mostly-white Cullman County. Many told him to withdraw, but he went on to win that seat in the Alabama House of Representatives in 2008. Now he’s running for governor.

He tells WBHM’s Gigi Douban why he decided to keep his hat in the ring. He served from 2008-2010 after that seat was vacated unexpectedly. Fields and his wife have seven children and 18 grandchildren. He worked his way through college with a series of jobs, according to his website, then later worked at the Alabama Department of Industrial Relations for more than 28 years.

Education
As a candidate for governor, he says he wants to make level the playing field for all schools in Alabama. An education lottery is an option, he says, but he can’t be certain residents will approve one, so the state needs to come up with another plan. For Fields, that plan might involve closing or consolidating schools to save money and better fund the schools that remain.

Religion
Fields is a Methodist minister. But he says he would maintain the lines between church and state. Hear his thoughts on this, and whether he is in favor of displaying the Ten Commandments publicly, as voters will decide in a referendum this November.

Jobs, Wages, and the Economy
Fields talks about what a living wage is, and some of the biggest obstacles to increasing wages in Alabama.

Health Care
Fields says all Alabamians deserve access to quality health care. He has plans to come up with the state funds needed to match the federal government’s contribution to enroll more Alabamians in Medicaid.

Family Life
Fields’ father was a coal miner and his mother worked at a chicken processing plant. Fields describes the difficulties he had as a child when his father struggled with alcoholism, and his father’s turnaround toward the end of his life.