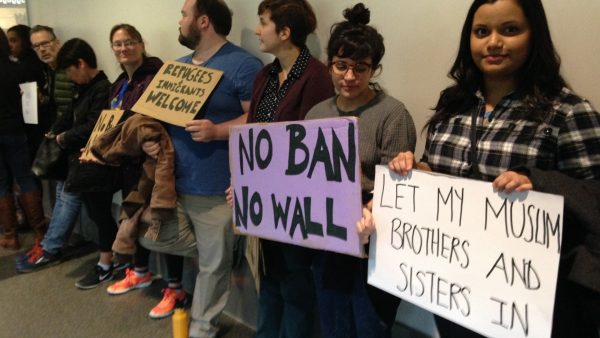 Protestors gather at Birmingham-Shuttlesworth International Airport in response to President Donald Trump's executive order banning travel from seven, Muslim-majority countries and an executive order calling for the building of the wall along the border with Mexico.

The order temporarily bans citizens of seven majority Muslim countries, along with all refugees, from entering the United States. Late Sunday, the Department of Homeland Security issued a statement easing part of Trump’s immigration order, allowing those with green cards from the seven countries to re-enter the U.S.

The executive order created confusion over the weekend at major American airports as travelers were detained or deported, some of whom had legal paperwork to enter the U.S. At least four federal judges around the country issued temporary rulings blocking portions of Trump’s order.

The Birmingham airport has no direct international flights, so there have been no incidents related to the executive order. Still, protestors took to the airport to rally against President Trump’s action. They marched around the public entryway and crammed into the hallway between baggage claim areas to hear speakers.

Marchers pause by the security entrance at the Birmingham airport.

“This is 1963 all over again,” says Ashfaq Taufique, president of the Birmingham Islamic Society. “We have been given a responsibility to be the voice of the marginalized communities in this country.”

“I saw white ministers throughout this county take a back seat,” King said.

Activist Frank Matthews holds up his fist to quiet the crowd.

Dr. Abdulsattar Zidan is a pediatrician in Clanton who is originally from Syria. Zidan attended the protest with his wife. He came to the U.S. in 2006 and has lived in Alabama since 2011. Zidan says his visa requires him to practice in an underserved area, and he chose the South.

Zidan says his relatives fled to Turkey to escape the fighting in Aleppo. He says he planned to take his children to Turkey this summer to see their grandparents, but Trump’s executive order raises the question of whether he would be able to re-enter the U.S. He still tells the kids they’re going.

“But basically we are crying inside,” says Zidan. “We cannot express ourselves in front of them.”

Zidan says the issues around refugee resettlement are complicated, but legal residents are being unfairly targeted by Trump.

“[They are] working, serving the community,” says Zidan. “You have doctors. You have an engineer. You have a teacher.”

Zidan says he planned to apply for U.S. citizenship in two years, but now wonders if he should try to settle in Canada or the U.S. He says he wants to live in a place that respects his education and the hard work he’s put in over the last 10 years.

The President’s exec order halting the Syrian Refugee program & barring entry based on religion is inconsistent with our American values.

“While there have been some issues with the order’s implementation, I look forward to working with the Trump Administration to make sure their efforts to protect the American people succeed in a timely and effective manner,” Byrne said.