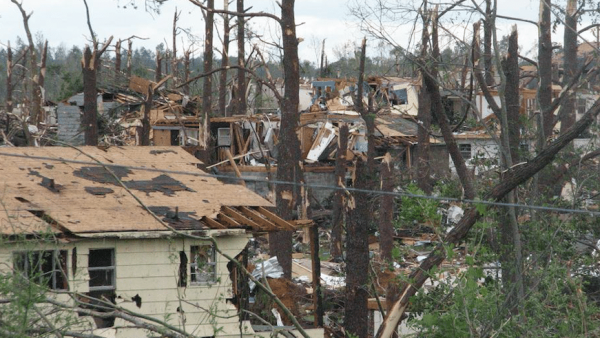 Damage in Pratt City on April 28, 2011, the day after a tornado tore through the Birmingham neighborhood. Most of the lush trees in the neighborhood were destroyed.

Walk around Pratt City, a northern Birmingham neighborhood, and you’ll see rolling hills and meet proud residents. But you’ll also see many vacant lots, reminders of a tornado that struck five years ago this week. It was part of a tornado outbreak that killed more than 250 people statewide. The community has rebuilt, but there’s still a lot of be done. Five years later, some residents think the recovery is taking far too long.

Remembering the Destruction in Pratt City

On April 27, 2011, Michelle Perkins didn’t feel like cooking dinner. So she invited over her kids and grandkids for pizza. Her home in North Pratt City was packed with family by the time she heard a tornado was heading right for them.

“We all ran in the closet and as soon as we closed the door to the closet the tornado hit,” recalls Perkins. She says the next two minutes felt like hours.

A Pratt City home the day after a tornado leveled much of the neighborhood. April 28, 2011.

“We were shaking. The house was shaking. We could hear the house pulling apart, I’m praying, the closet door was opening up and we had all the guys holding it back…and it just got still. So I came out of my closet and walked up the stairs to the kitchen and I could see the sky,” Perkins says.

After the initial shock wore off, Perkins and her family sprung into action.

“You could hear people screaming and hollering, so all the guys got up and ran down there to help them,” she remembers. “My son came back, and that’s when we found out we couldn’t find my aunt. She died. She was the only causality in Pratt City.”

The tornado leveled much of the community. The local library, fire station and a large church were also destroyed.

Her home, where she’s lived since she was nine, was ripped in half and had to be almost completely rebuilt. As she stands in her backyard, she sighs.

Michelle Perkins on the front porch of her home today, after massive repairs. “It’s practically a new house,” Perkins says. The April 27, 2011, tornado split the home in half.

“Now when I come out, sometimes I can look and I’m ok. Sometimes…it’s really sad,” she says.

A lot has changed in Pratt City since the storms. The city of Birmingham used millions in disaster relief funds to rebuild the ravaged fire station and construct more than 60 housing units for seniors. The new Pratt City Library opened in 2014. Perkins’ block is now lined with completely or mostly new homes. But, she says, there’s no shade to block the intense sun. The tall oaks that filled the neighborhood when she grew up are gone.

“You see all the houses?” she says, gesturing to the hills on the other side of the street. “We used to couldn’t see those houses, it was trees. You can see almost all the way back to the freeway.”

Perkins is the North Pratt City neighborhood vice president and an advocate for its reconstruction. Perkins says while the city of Birmingham and local news outlets hold up her neighborhood as a success story, that’s not the whole picture.

“Every time the news come out, they always go on Hibernian and Dougan [a major intersection], where they built new houses, where the library is built, where the fire station is built,” she says. “But if you come over into Pratt City, it’s nothing like what they show on TV.”

This tree is all that remains of a previously wooded lot in North Pratt City.

She sees empty lots with driveways leading to nothing. And no community storm shelters, like Perkins says the city promised.

“They keep telling me the ‘We’re coming to test the soil, we’re testing soil,'” says Perkins. “Ok, you’re gonna test soil, or you’re telling me you’re testing soil. Fine. But we’re still not getting it, and if another one hits, what are these people down here going to do?”

The Pratt City neighborhood is no stranger to tornadoes. It was hit by twisters during tornado outbreaks in 1956, 1977 and 1998.

City of Birmingham Sees a New Future for Pratt City

City Hall says it’s working on the shelters, but ran into issues along the way.

“The construction estimates came back and were significantly higher than the projections,” says Matthew Churnock, the City of Birmingham’s disaster recovery manager for the Pratt Community. “The funding mechanism was a FEMA grant to provide those storm shelters. So the city had to regroup and look at some other funding opportunities.”

Churnock says two shelters should be under construction in the next 30 days, and the city plans to pay for five more shelters in North Pratt.

“In total, there should be seven community safe rooms under construction pretty soon,” says Churnock.

A rendering of the proposed park in North Pratt City.

The city of Birmingham is also working with Tom Leader Studio, the same landscape architecture firm that created Railroad Park, to create a park around the rebuilt Pratt City library. Churnock says representatives from the firm will visit the area this week to talk with Pratt City residents. Landscape architect and designer Tom Leader starts a three-day site visit Tuesday morning.

Still Work to be Done

Pratt City Library Branch Manager Deborah Blackmon says she’s proud of how the neighborhood has rebuilt so far and of what the new library’s become.

“We truly are a community hub,” says Blackmon. But she acknowledges there’s still a ways to go.

“We don’t have nearly the number of children that we had before because they can’t walk here,” Blackmon says. “They’re still working on the infrastructure in the community.”

The rebuilt Pratt City Library opened in February 2014. The neighborhood’s old library was destroyed in the April 2011 tornadoes.