What Makes Birmingham a “Food Town?” 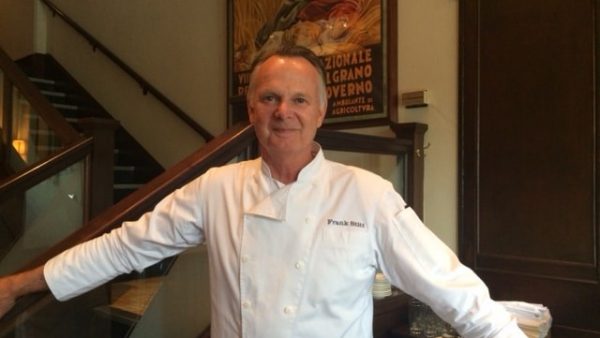 Alabama native Chef Frank Stitt is considered by many to be the godfather of Birmingham's modern food scene.

People in Birmingham love their city’s food so much they write songs about it.  We found Ja-Neen Gandy hanging out with her kids at Railroad Park eager to share her ode to Gus’ Hot Dogs.

Musical tributes are just one way residents of the Magic City express their appreciation for Birmingham’s food culture. Others write about it.

“Maybe this is an over generalization, but people who aren’t from the south like me, I’m from Pittsburgh originally and affiliated in New York, become a very specific perception of the south. You know a monotone one-dimensional perception, but it’s really not like that at all here,” says Jessica Merlin. She and her husband Scott Doty are the creators of the food blog What to Eat in Birmingham.

Birmingham is a smorgasbord of chefs, and people, with a deep enthusiasm for expanded offerings, Merlin says. Retracing the routes of the city’s culinary renaissance, we end up in the kitchen at Bottega Café with the man who’s considered the godfather of Birmingham’s modern food culture, Alabama native Frank Stitt.

The chef altered Birmingham’s culinary DNA in the 1980s when he blended foods from his Cullman roots with classic European recipes. Stitt’s a passionate supporter of locally sourced ingredients, something he’s proudly passed down to several protégés, many of whom have opened their own restaurants in Birmingham.

“I’d like to think that we’re a family of folks that have had a positive impact on Birmingham and that we’ll continue to, says Stitt.”

“I think Birmingham as a community respects more diversity. And I think that food has allowed us to expand our appreciation of diversity,” Stitt says.

From regional Italian to Mexican fusion, we travel to El Barrio Restaurant and Bar on 2nd Ave North where we meet co-owner Neville Baay. Originally from New Zealand, Baay has worked in restaurants all over the world. He says there are three main components that make a city a food town. First, there have to be local producers and farmers…and second, of course, chefs to prepare the food. Lastly, there needs to be a built in population that loves to eat.

“Those three ingredients are here in abundance. You can try all you want, but you can’t manufacture those,” Baay says. “Those have to exist and there has to be this organic growth of all three.”

Baay says Birmingham’s economic revitalization will only further this trend. He’s been here for ten years and he says, in that decade, the city has transformed…. and that transformation has only just begun.

“This is like every great city you’ve ever been to, but it’s in its infancy,” he says. “You have this downtown that is slowly developing and slowly reemerging, and we’re on the ground floor.”

While Birmingham continues to mature, so does its food culture. And it doesn’t matter if you’re savoring squid ink spaghetti, Barrio cornbread or munching on Gus’ hot dogs, Baay and the other culinary experts agree that Birmingham is a food town because of the people that live here. And those people love their food.

The mural at El Barrio Restaurant and Bar on 2nd Ave North.