Changing Gears with the Launch of Bikeshare in Birmingham 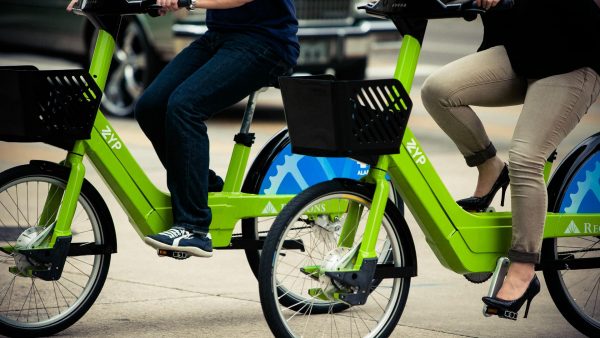 Kiosks have been popping up in parking spots around Birmingham. These 40 stations will hold 400 bikes. They’re part of Zyp BikeShare, which starts tomorrow. Cycling has devotees in the Magic City, but plenty still see it as a risky way to travel. Cycling enthusiasts hope more bikes on the road will change attitudes.

Repairs are under way at Redemptive Cycles in downtown Birmingham. Bicycles hang from the walls and ceiling, and an old horror movie plays in the background. People wander in and out of the shop, talking to the friendly mechanic, and generally hanging out. It’s like an old time saloon for cyclists, and that’s fitting, because when you ask executive director Marcus Fetch about cycling in Birmingham, he says, “It’s kind of like the Wild West.”

Redemptive Cycles is where cyclists share their trials from the trail.

“We get to hear from everyone, all the stories,” says Fetch. He says he’s heard hundreds. Stories of drivers yelling at cyclists, veering very close, cyclists getting objects thrown at them, and accidents.

“We just had a dear cyclist die,” laments Fetch. William Robertson was a well known local contractor, founder of the Magic City Cyclers, and a member of Black People Run, Bike and Swim. He was killed in late August when a pickup truck ran into him and two other cyclists. “That man was an incredibly safe rider,” Fetch remembers. “Lights, helmets, reflective gear, the whole thing and he rode very safe. So for him, to get him was just absurd.”

“Whenever there’s a tragedy in a community, there is an obligation for motorists to figure out ways they can create a safe environment for cyclists,” says Patrick Packer, co-founder of Black People Run, Bike and Swim, and a friend of Robertson.

Packer leads rides through the city every week. He basically devotes his time to helping black communities live active lifestyles.

“I cycle because I love the feeling of being on the road. It’s in my blood,” he says. “I’m so glad that I was able to begin cycling almost five or six years ago. Now, it’s become addictive.” He cycles on Birmingham’s grid of wide streets, guarded by brown, red and beige stacks of buildings. He says the city center is seeing a return of people by 4 wheels, and now, by two.

“When people see cyclists on the road, they want to join in,” Packer says. “So how can we help the people join in? One of the ways is by having a great bike share program.”

Lindsey West is the director of Zyp, and the force behind bike sharing in Birmingham. She led a feasibility study in Fall 2013 to answer a BIG question: Is the city ready for bike share?

“Typically bikeshare is the catalyst for more bike infrastructure in your community,” she says. “We asked tons of communities: Chicken or the egg? Chicken or the egg conversation: bike lanes or bike share, which ones come first? And everyone said bike share comes first, because if you wait for bike lanes, you’ll never get them. ”

Cyclists are hoping more bikes on the road can create a cultural shift that leads to more people cycling, and drivers paying more attention to people on bikes.

“It’s still been an ongoing battle, teaching people that they belong on the road,” Fetch says. He knows that it’s up to the city and drivers to accommodate cyclists, especially with beginners who have never set pedal to the streets of Birmingham. “After the initial kickoff, if people are using these (Zyp) bikes, and they don’t feel safe enough riding them, it’s going to decrease.”

Zyp is looking at cities like Chattanooga as role models.

“They actually saw a tolerance change,” in Chattanooga, says West. “It’s no longer driver vs cyclist or cyclist vs driver. We’re people behind bikes and we’re people behind a wheel of a car. Therefore, we become more tolerant towards each other, and we know what we’re supposed to be doing.”

West says with bike share, more drivers will have the opportunity to cycle the city. West hopes knowing how it feels to be on a bicycle will enlighten drivers and dispel any mystery about how to react on the road.

The wheels are in motion for safer cycling in Alabama. The state legislature recently enacted a law that made veering less than three feet from a cyclist illegal. Last month, the Alabama Department of Transportation announced they’re developing a Statewide Bicycle and Pedestrian plan.

In Birmingham, Zyp BikeShare is partnering with the League of American Bicyclists to help Birmingham become a contender for the that group’s next list of bike-friendly cities.