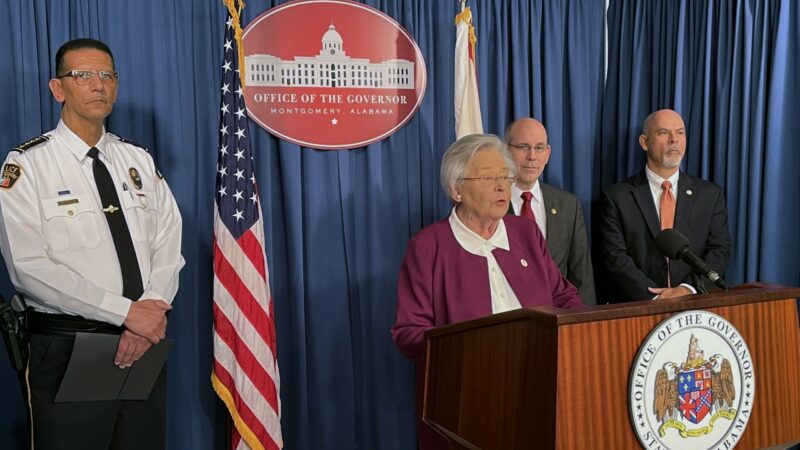 At a press conference announcing the executive order, Gov. Kay Ivey said it provides “clear rules” on how much “good time” credit will be lost for different offenses.

MONTGOMERY, Ala. (AP) — On Monday, Alabama Gov. Kay Ivey announced new rules for prison “good time” incentives that allow some inmates to shorten their prison stays based on their behavior.

Ivey signed an executive order that she said will provide “clear rules” for prison staff and inmates on how much “good time” credit will be lost for different categories of offenses and how an inmate can restore the credit.

“Our actions today, very simply put, keep violent offenders off the street, incentivizes inmates who truly want to rehabilitate and better themselves, reinforces the concept that bad choices have consequences and keeps our public safe,” Ivey said during a press conference at the Alabama Capitol.

Alabama law allows inmates sentenced to 15 or fewer years in prison to receive “good time” behavior incentives to reduce their time in prison. In 2021, about 9% of state inmates were eligible for these incentives, according to the Alabama Sentencing Commission. People convicted for rape, murder or manslaughter are ineligible.

However, the order “essentially ends good time or makes it extremely difficult for anyone to earn it given the brutal conditions across the prison system,” said Carla Crowder, executive director of Alabama Appleseed Center for Law and Justice.

“This is absurd and reflects state leadership that is completely out of touch with the public safety crisis in Alabama prisons. … It would be laughable, if it weren’t so sad and dangerous, that anyone believes harsher punishments will fix this crisis and make anyone safer,” Crowder said.

She said many of the people eligible for good time and impacted by the executive order are young people incarcerated for nonviolent drug and property offenses.

Ivey’s executive order categorizes offenses from low to severe — and outlines how much “good time” will be forfeited. For example, an inmate will lose a minimum of three years of good time for a high-level violation — which includes assault, possession of a weapon, encouraging a work stoppage and failure to obey a direct order from a prison employee. An inmate can apply for restoration in 90-day increments after a year of good behavior.

Ivey said she supports the use of good time behavioral incentives, which are used to try to combat prison violence by giving inmates a reason to follow rules, but to begin with, there should be concrete rules in place.

The state prison system has come under criticism and federal scrutiny for high rates of violence. The U.S. Department of Justice has an ongoing lawsuit against Alabama over prison conditions.

After the fatal shootings of two law enforcement officers, some aspects of Alabama’s good time law have been criticized by state politicians.

Lawmakers last year added manslaughter to the list of offenses ineligible for good time following the shooting death of Sergeant Nick Risner of Sheffield. A man accused of killing Bibb County Deputy Brad Johnson in 2022 had been released with good time despite escaping from a work release center in 2019. A spokesperson for the prison system said in July that Austin Hall, who was in a local jail on other charges after being captured, never returned to state prison custody after his escape, so he never had a disciplinary hearing to revoke the good time.

Under Ivey’s order, escape would cause an inmate to permanently lose all accrued good time credit. The order also makes changes aimed at improving communication with other law enforcement agencies regarding escapes, and for state prison staff to quickly assume physical custody of an escaped inmate upon recapture by another state law enforcement agency.