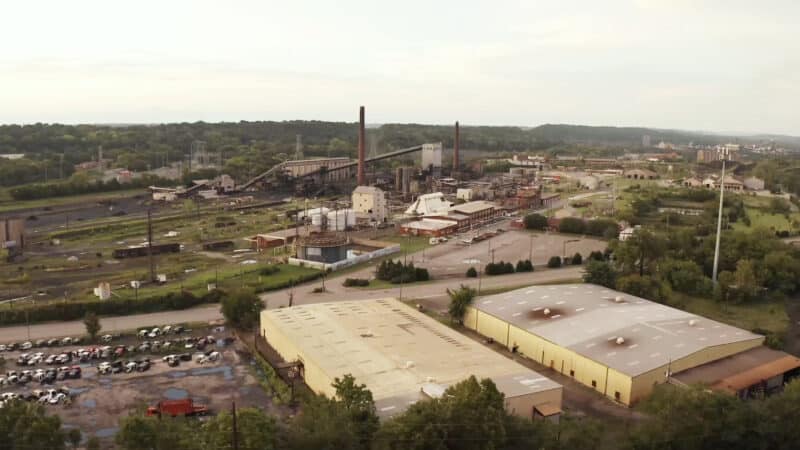 This story was originally published by ProPublica, a Pulitzer Prize-winning investigative newsroom. Sign up for The Big Story newsletter to receive stories like this one in your inbox.

The owner of one of Birmingham, Alabama’s oldest industrial plants has agreed to pay a nearly $1 million fine after releasing excessive amounts of toxic air pollution into nearby historic Black neighborhoods, according to a proposed consent decree filed Friday in a Jefferson County court.

If the consent decree is approved by a judge, the Jefferson County Board of Health’s $925,000 penalty against Bluestone Coke would be the largest fine in the agency’s history. But it represents a small fraction of the more than $60 million in fines the company could have faced for its alleged violations. The consent decree would not require Bluestone to admit to wrongdoing.

The plant was the subject of a ProPublica investigation in September that revealed how Bluestone, owned by the family of West Virginia Gov. Jim Justice, repeatedly failed to make crucial repairs to the facility. The lack of timely maintenance accelerated the release of cancer-causing chemicals into the air that neighboring residents breathed.

In August 2021, after finding Bluestone in rampant violation of its air pollution rules, the Jefferson County Department of Health denied the company’s request to renew its permit to operate. The board that oversees the Health Department also sued Bluestone, alleging that the company’s operation of the plant was a “menace to the public health.” Because of the scope of repairs needed, the plant, which for more than a century has processed coal into a fuel called coke, has been idle since October 2021. Bluestone will be able to work toward reopening the plant once a judge signs off on the deal.

In the generations before Bluestone acquired the plant in 2019, people living in the area — some of them forced to reside there because of racist housing policies in the 20th century — faced exposure to levels of contaminants in the air and soil that have ranked among the worst in the nation. The pollution has stained the facades of nearby houses a dark charcoal, helped drive down home values to as little as $1,000 and sickened so many residents that families feared letting children play outside.

The coke plant was part of a cluster of industrial facilities on the city’s north side that became a symbol of environmental injustice in the South. Government agencies across the region have struggled to reduce the harm to working-class communities of color due to disproportionate exposure to industrial pollution, according to Mustafa Santiago Ali, a former environmental justice official with the U.S. Environmental Protection Agency.

Environmental experts have told ProPublica that any penalty under $1 million would be shockingly low.

Steve Ruby, an attorney who works with the Justice family, said in a statement that “any criticism that the amount is too low is unfounded and fails to take account of the full context of the resolution.” He added that the consent order “will provide the certainty that the company needs to complete its evaluation of the plant’s future.”

“Despite investing tens of millions of dollars in long-deferred maintenance, Bluestone was unable to fully overcome those challenges, and it ultimately concluded that only a rebuild would allow the plant to operate profitably and in compliance with environmental requirements,” Ruby said.

Wanda Heard, a spokesperson for the Health Department, declined to make anyone available for an interview or to comment on the Bluestone penalty. She said in a statement that the consent decree will “protect the public as well as the environment.”

Bluestone faces a long, complicated road to get a permit allowing it to restart operations.

This past summer, Jefferson County health officials noted during an inspection that Bluestone “cannot resume production without substantial capital investment.” Industry experts familiar with the plant estimate that Bluestone will need to spend more than $150 million to reopen it. On top of that, the company still owes millions of dollars in unpaid fees to government agencies such as the city of Birmingham and to companies and contractors who had worked at the plant before it stopped making coke in the fall of 2021.

The consent decree requires that Bluestone draft extensive plans that outline the necessary repairs to the plant and hire an independent engineer to assure that its coke ovens can operate in a “safe and compliant” manner. Bluestone will then need to submit those records when it applies for a new permit.

Health Department officials could deny Bluestone a permit if the company were to fail to resolve enough of the problems related to its past violations. And the EPA could force Bluestone to pay a higher fine if the federal agency determines the county’s consent decree or permit is too lax. EPA spokesperson James Pinkney said in a statement that the agency “would coordinate with JCDH in its oversight role” if Bluestone applies for a permit but declined to specify any actions that might be taken. Stan Meiburg, a former acting deputy administrator for the EPA, said that officials with the federal agency rarely take this step.

If Bluestone resumes production, the consent order will likely force the plant to reduce emissions compared with previous years, said Michael Hansen, executive director of environmental advocacy group GASP, which represented the interests of community members in the lawsuit and signed onto the consent decree. He said the consent decree would ensure that Bluestone “cannot continue to pollute without consequences.”

“This is one step among many to ensure that residents get justice,” Hansen said. “It’s not the end of the road. There are lots of steps along the way for Bluestone to reopen. There’s more we can do to hold them accountable.”

The proposed consent decree calls for monitoring of a single pollutant, sulfur dioxide, which can harm people’s lungs. In recent years, officials with the EPA had modeled that high levels of sulfur dioxide were coming from the Bluestone plant and ABC Coke, a nearby plant that is still operating after its owner reached a $775,000 settlement last year with environmental regulators over alleged air pollution violations. The Jefferson County Board of Health is mandating that the company operate at least two air monitors along the fence of its property for five years if the plant reopens.

But the consent decree would allow Bluestone to sidestep extensive rounds of monitoring for other toxic chemicals in the air. Before the company suspended coke production, the Health Department was not routinely monitoring for toxic air pollutants on the city’s north side. As a result, GASP hired experts to test air in the surrounding communities, and they discovered chemicals such as benzene or naphthalene at levels high enough to elevate the risk of cancer. Despite these findings, the consent decree will not require Bluestone to test for benzene, naphthalene or other cancer-causing chemicals associated with coke production. Heard told ProPublica that the study results that GASP provided to the Health Department “don’t reveal any new or concerning air pollution data.”

The consent decree also commits half of the $925,000 penalty to community improvement projects. The funding would come at a time when some local officials are considering the scope of what is owed to the communities harmed by the plant.

Birmingham Mayor Randall Woodfin’s administration has crafted a $37 million plan that would pay for property buyouts for residents and revitalize the city’s north side communities for those who wish to stay. Woodfin, who has yet to find partners to help fund the plan, believes that companies including Bluestone should cover some of the costs. Bluestone executives have not responded to questions about their willingness to contribute to the plan.

Charlie Powell, founder of the community advocacy group People Against Neighborhood Industrial Contamination, doesn’t believe that the amount Bluestone has agreed to pay in the consent decree goes far enough to offset the harm to nearby residents.