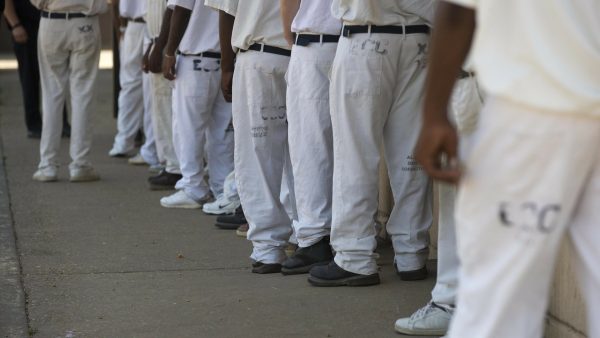 In this June 18, 2015 file photo, prisoners stand in a crowded lunch line during a prison tour at Elmore Correctional Facility in Elmore, Ala.

MONTGOMERY, Ala. — An Alabama corrections officers has been placed on leave following a video that appears to show him beating a distressed inmate who had climbed to the edge of a roof.

The video, circulating on social media, shows what appears to be a distressed inmate on the edge of a roof at a building at Elmore Correctional Facility, while a group of prison staff look at him from the ground. An officer walks across the roof and drags the inmate back from the edge. The officer then appears to punch the inmate several times once he is away from the edge.

Officer Ell White has been placed on mandatory leave pending investigation, a spokesperson for the Alabama Department of Corrections wrote in an email.

The prison system said Jimmy K. Norman, a 44-year-old inmate, “had climbed on top of the facility chapel, prompting Officer White and other correctional officers to attempt to escort Norman off the roof.”

The Law Enforcement Services Division of the Alabama Department of Corrections is investigating the incident and response by the staff involved, the prison system said.

The U.S. Department of Justice has an ongoing civil lawsuit against Alabama over conditions in the state prisons, saying the state is failing to protect male inmates from inmate-on-inmate violence and excessive force at the hands of prison staff.

The 2020 lawsuit alleges that conditions in the prison system — which the Justice Department called one of the most understaffed and violent in the country — are so poor that they violate the ban on cruel and unusual punishment and that state officials are “deliberately indifferent” to the problems. Alabama officials have acknowledged problems in the prison system, but are disputing the Justice Department’s accusations.