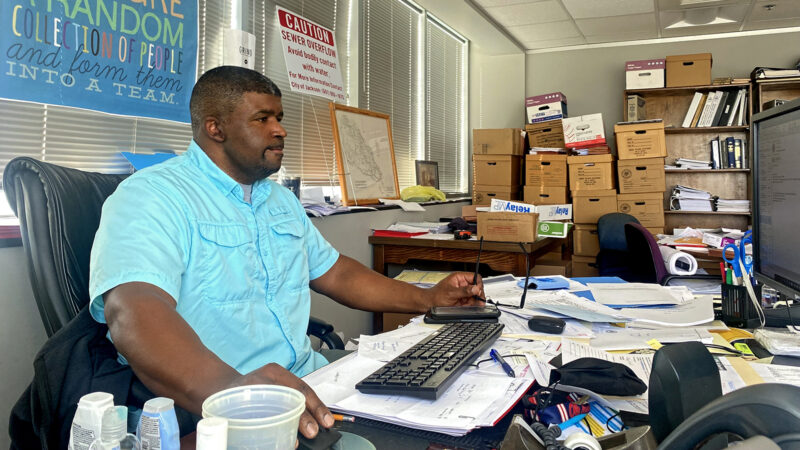 Williams, who holds a doctorate in philosophy and civil engineering and was the director for Jackson Public Works at the time, had his eye on how the weather would affect utilities in the city. He assumed Jackson would get very cold — maybe it would even get a little ice or snow — but that would be the extent of the city’s winter woes.

Instead, Mississippi and a swath of Southern states were hit with two winter storms within days of each other. The first arrived on a Sunday evening, Valentine’s Day, and lingered through Monday. The second hit Tuesday night and stayed through Wednesday. Temperatures plummeted below 32 degrees in areas that are not used to freezing, pipes froze and Jackson’s main water treatment facility, the O.B. Curtis Water Treatment Plant, almost shut down completely. Williams called it ground zero.

“We could not bring water in, we could not push water out into the system,” Williams, who is now serving as a city engineer, said. “[we had a] number of calls for low water pressure, or just no water at all.”

In his 20 years with Jackson Public Works, this was the most challenging time in Williams’ career. In the heat of the moment, he remained calm — mostly because residents, and even his coworkers, were unnerved.

“From a personal level just seeing people suffer like that, It was tough,” he said. “If they needed to unload on somebody, I’d be the person to unload on. My primary focus [was] to lead everybody toward our goals and objectives.”

Tens of thousands of people were left without running water because of the storms — some for up to a month. But the storms were not the sole root of Jackson’s water infrastructure woes, but rather the latest thorn in the side of a system plagued by issues for decades.

Williams mentioned winter storms in 2010, 2014 and 2018 that caused water outages in sections of the city because of water main breaks. Even before the 2021 storms, the O.B. Curtis plant was not fully operational, with some of its equipment offline because it was either in need of repair or the department did not have enough personnel to manage it.

When the storms hit, the system basically collapsed.

“It exposed a lot of deficiencies within our system that have been very prolonged for a number of years,” he said. “And unfortunately, this winter storm that hit the metro area, crippled our water system.”

No neighborhood felt the effects of the water outages more than West Jackson and South Jackson, which have the largest Black populations and highest poverty levels in the city. They both are also located farthest away from the plant and have higher elevations than the rest of the city, making it hard to restore water when outages happen.

Gino Womack, the program director for Operation Good, wanted to make sure these areas were not neglected.

Womack started the community organization with other Jackson residents to aid the city’s neighborhood known as The Bottom — organizing clean-ups and spearheading conflict resolution efforts throughout the city to combat crime. The group has since expanded to delivering water and food to areas that need it.

When the 2021 storms hit, they sprung into action. Some residents lost power for a short time, so Womack and Operation Good worked to get elderly people out of their homes and into hotels. When some neighborhoods regained power or water, Operation Good shifted their focus to remaining visible in areas that were still without it.

Womack said the storms were the worst he’s ever seen, rating it an 11 on a one-to-10 scale.

“South Jackson was the last place to get water so we really took care of the majority of the people in this part of town,” Womack said.

Baylis McDaniels lived with her daughters and grandchildren in an apartment in South Jackson when the storms came. She said the water was running fine for some time during the storms, but it quickly turned to a trickle and then it went out.

That began a month-long daily search for water just to carry out everyday tasks.

“I was getting up every day to try and find water [to] flush the toilets,” McDaniels said. “We had to have water to take baths, water to cook with, water to do everything.”

Bottled water became a necessity in McDaniels’ home also because her grandson, who was an infant at the time, has special needs and needed it specifically for his feedings.

But stores quickly ran out of bottled water, causing McDaniels to rely on either friends who lived in nearby counties to bring them water, or churches and groups like Operation Good that were distributing it.

On the anniversary of the storm, volunteers from Operation Good delivered bottled water to residents on McDaniels’ street concerned about contaminants, including lead, in the water. In 2016 it was reported that the water in 22% of Jackson homes had lead levels above the federal action level of 15 parts per billion. Last fall, more than 600 children’s families filed a lawsuit against the city that claimed the kids had been exposed to dangerous levels of lead for years.

Even though the water is back on, McDaniels, like other South Jackson residents, doesn’t trust it.

“It just doesn’t taste like water,” she said. “It tastes like it has something else in it — dirt — like it’s coming out of a dirty pipe or something.”

After delivering water, Womack drove around South Jackson through some of the neighborhoods that Operation Good works in. He said the area used to be home to several businesses and well-maintained homes. Now, on the busy Terry Road thoroughfare, he points out several commercial spaces still standing that are empty and dilapidated with their windows boarded up — including banks, daycares and fast-food restaurants.

For South Jackson residents, the once-thriving area’s current state serves as a reminder of how they felt neglected as weeks went by after the 2021 storms, Womack said, and how they were still without water even as service was restored in other areas.

“They didn’t understand, how is it that we live here in a city and we can’t even have working pipes. How is it that this is the capital of the state of Mississippi?” he said.

City government and state legislators are reportedly often at odds over funds for improving Jackson’s aging infrastructure. As an older city, Jackson’s water issues are often competing with several other infrastructure problems in need of attention, Williams said. After the 2021 crisis, the city requested $47 million to fix its water system. The state, instead, granted them $3 million.

“​​I think that sometimes we get a little comfortable when the water is on and the [water treatment] plants are not visible,” Williams said. “A lot of times, we’ll focus our attention, maybe, on another infrastructure system. We have roads that need to be repaired, we have flooding problems within the city, we have sewer-related issues and all of them need funding.”

Adding to the complications is Jackson’s poverty rate. The U.S. Census Bureau reported that 25.4% of the city’s residents fell below the poverty line in 2020, well above the national rate of 11.4%.

Help is on the way. For some, it’s too late.

Last year the city received the first $21 million of a total of $42 million from the American Rescue Plan. Eight million dollars from that initial installment has gone to a project to finish installing a large pipeline that runs from the O.B. Curtis Water Treatment Plant through the city to South Jackson that will improve water access in South Jackson.

The Environmental Protection Agency has designated $75 million from the Infrastructure, Investment and Jobs act for Mississippi’s water and sewage infrastructure, but the city will have to bid for some of those funds. It’s also estimated that Jackson needs a lot more than what’s allotted for the whole state to improve its water system. Jackson Mayor Chokwe Antar Lumumba’s office said the city needs close to $2 billion to adequately update its water and sewage systems.

Williams said the city will apply for whatever funds they can to make the most critical repairs and that it will take continued investment every year in order to keep making updates, maintain equipment and structures and ensure that it has enough personnel to manage the system.

“It’s really not just a one-time cost, it’s a cost that is really spread out over a number of years because there’s just so much that needs to be addressed,” he said.

Despite the potential lifeline heading South Jackson’s way, it’s all become too much for McDaniels. She’s lived in Jackson all her life but is fed up with the infrastructure issues and a recent uptick in crime.

“I’m just ready to be done with Jackson altogether,” she said. “Probably within the next six months, I’m leaving.”

Residents have been leaving Jackson in droves for decades — first after 1970 when white families fled as public school integration began. That trend has continued. With roughly 20,000 people moving out of the city between 2010 and 2020, Jackson was the major U.S. city with the highest population decline during that time period, according to the Census Bureau.

McDaniels said she and her children and grandkids might move to Texas, where she has relatives. But the storm that left her without water for a month also collapsed Texas’ independent power grid.

As Mississippi and other Southern states experience more extreme weather due to climate change, Williams said Jackson will have to consider new measures to keep the water systems functioning correctly.

“Do we need to start covering our water systems and wastewater system so they won’t be crippled during these types of events?” he said.

In the meantime, Womack is bracing himself for another potentially devastating winter storm before the season is over.

“I do feel like we’re going to get one more cold weather period,” he said. “I don’t know how the water system is going to hold up.”