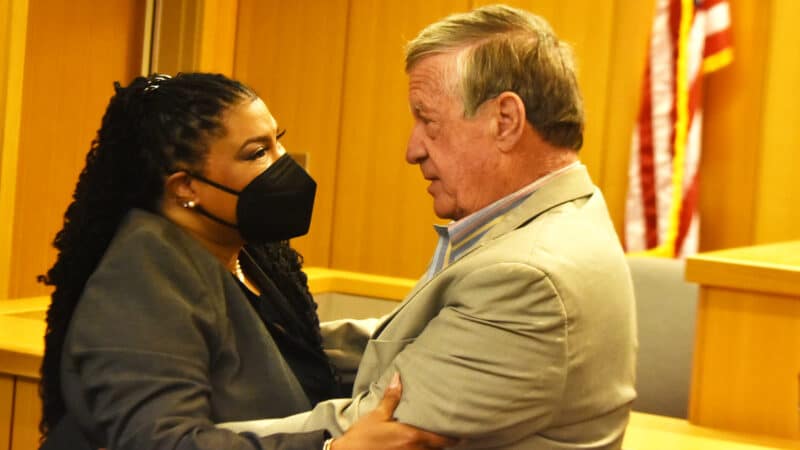 Bessemer Absentee Voting Clerk Karen Dunn Burks had a hug for every member of the Jefferson County Commission present after the panel settled on a resolution to a contentious disagreement over where absentee voting will take place in Bessemer.

During its meeting Tuesday at the Bessemer Justice Center, commissioners moved to Thursday’s meeting agenda a plan for absentee voting to continue in the ceremonial courtroom in the basement of the justice center while the offices of the county manager and general services explore the possibility of moving the office to the second floor.

Burks last week accused Jefferson County government of voter suppression because of plans to move her office from the courtroom basement to another office also in the basement. She contended the plan created unfair conditions and accommodations for voters and was inhumane.

“I feel very hopeful. I feel very good,” Burks said after Tuesday’s meeting. “I was very joyous to hear the commissioners all say that they wanted the best for the Bessemer Division and for the voters. Where we currently are, they acknowledged that it was not the best flow turn.

“The decisions that were made here and to have the county manager (Cal Markert) go up and to look at (the second floor), it’s definitely steps toward the right direction,” she continued. “I’m grateful for the fact that I felt that everybody here wanted the best for the citizens. That’s all I wanted. I wanted them to know and look at the room. I think today was the first time they really had a chance to look and to acknowledge there were some things that were not quite right.”

During the discussion, Commissioner Joe Knight acknowledged having gone into the basement room that was to be built out for absentee voting. He cited a hum in the room from heating and cooling units that serve the entire building.

“They’re willing to look at alternatives on the second floor and I’m just so grateful for that,” Burks said. “I’m appreciative of what Commissioner (Lashunda) Scales said and Commissioner (Sheila) Tyson. And also, definitely, what the president (Jimmie Stephens) stated and how he felt. I was appreciative … for his willingness to help.”

The commission president said the location of absentee voting in Bessemer had “too much controversy around for something that should be very simple.”

“I think this commission needs to have our county manager research that second floor courtroom. If it is feasible to be able to utilize that, I think that is the space that everyone has decided upon. In the meantime, we have time to work through that,” he said. “Let’s give the county manager and his staff and general services a chance to see what they can do.”

Stephens, the District 3 commissioner whose area includes the Bessemer Cutoff, had been the target of verbal blasts from Burks. But following the committee meeting, Stephens said those claims were simply rhetoric. He added that he had not been involved in the matter.

“Sometimes you’re given credit for things you have no knowledge of. That was the case on my point,” he said. “I think that now that it is clarified and I think the proper decisions were made, I think that while we build out a place that does not disenfranchise any voters, I think we’re in good shape.

“I’m glad to come to that understanding,” the commission president said. “It’s much better when you talk to people instead of at people. I think that we finally talked to each other today.”

In another matter, Knight said some of the budget items for staff development were “eyebrow-raising.” He acknowledged later that departments had the money for those items in their budgets.

“They were large amounts but I guess it’s getting close to the end of the budget (year),” he said. “If you budgeted and it’s in your budget, I don’t have a problem with it. They talked to me about these large amounts. It’s not a conference. It’s actually a training … an extensive, comprehensive course.

“That’s my job, holding them to the budget.”